Turn That Noise Down - Shakespears Sister 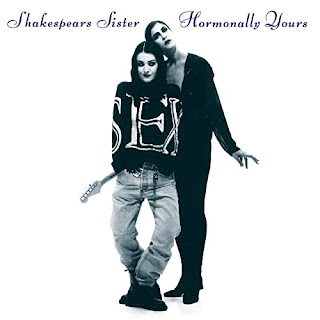 So many well-known albums turn 30 this year and Steve Taylor-Bryant and Susan Omand travel back to 1992 to revisit some of the sounds of their youth that made parents shout "Turn that noise down!" This week, Susan is Hormonally Yours... wait...

Way, way back in the mists of 1992, there was no such thing as music streaming. If you wanted to hear a song more often than it was played on the radio, [because of course you didn’t tape just it off the radio onto a blank cassette did you because that would have been illegal - Ed] you had to buy a physical copy of it. We were just getting used to the new fangledness of CD’s where I lived [the hinterlands of nowhere? - Ed] and CD singles were available but, to be honest, they were just about as expensive as the CD albums of the time but with fewer songs on, so I bought the album instead. And that, dear reader, is how I came to own a copy of Hormonally Yours by Shakespears Sister thirty years ago.

And that, dear reader, is probably also why I haven’t listened to it in 29 of those thirty years, because it got stuck in a box in a house move and forgotten about. Dusting off the old CD changer [What? You still have one of those?! - Ed] I gave the rediscovered album a whirl and rejoiced because I’d forgotten how good it was. From the violins at the start of Goodbye Cruel World to the final tick tick beeeep of Turn Your Radio On it’s just an end to end bop. I Don’t Care starts with a glorious wail from Marcella Detroit that only dogs can hear and goes on to pick up a rhythm that reminds me of Love Cats by The Cure. My 16th Apology is very sixties pop in sound but the lyrics are brilliantly bleak… “Things were going pretty well 'till I died” indeed. Are We In Love Yet goes all 70s funk and Emotional Thing is mid 80’s New Romantic with a dark edge and a harmonica that Culture Club would have been proud of.

Black Sky has some cracking guitar undercutting the superb vocals of Detroit and Siobhan Fahey. The Trouble With Andre starts all electronica with a Human League-esque drum machine and the country rock guitar twang is a marvellous counterpoint. Moonchild has a suitably otherworldly background heavy breathing thing going on [er, wut? - Ed] that oddly works well with the close harmony vocals. Catwoman is beefier on the guitar although it still manages to add some interesting plinky/wibbly instrumentation in to elevate it from yer typical 90s female rock track (think Alanis Morissette or Alannah Miles and you’ll know what I mean). Let Me Entertain You isn’t a time-travelling cover of the Robbie Williams song, which came out five years later, but is probably, lyrically, the closest to a Bananarama song on here just with added blokey humph noises. The album rounds out with Hello (Turn Your Radio On) that I honestly thought either was a cover or was covered by someone famous because it didn’t sound like I remembered it but my investigations proved fruitless so, yeah, that must be it right enough.

There’s one more song on the album that I haven’t mentioned - the one I bought the thing for in the first place. It was all over the radio and stayed at number 1 on Top of the Pops for eight weeks. I loved the simplicity of the melody, I loved the incredible contrast of their voices and I loved loved loved the operatic melodrama of the video. The song that started my 1992 was Stay.
Image - Amazon