Susan Omand gets in a Viennese whirl as she watches the traditional New Year’s Day Concert Live from Vienna...

It has long been a Philharmonic tradition at the New Year to present a programme consisting of the lively and, often, rose-tintingly nostalgic music from the vast repertoire of the family of Johann Strauß [ooh look who’s showing off with finding the ß key on the keyboard - Ed] and their contemporaries. And it’s long been a tradition of mine to watch it on TV. This year was no exception with BBC Two showing the full two and a half hours concert on New Year's Day morning. It is available on iPlayer for the rest of the month if you want to watch it all but there’s also an edited highlights show that cuts out the interval faff that BBC Four did if you’d rather [I’d rather not - Ed].

So, grab your tin of Quality Street and a blanket and settle in as we go track by track on this year’s New Year Concert by the Vienna Philharmonic Orchestra under the baton of Daniel Barenboim, for the third time, and in the gloriously flower filled Golden Hall of the Musikverein in Vienna. The show is introduced as ever by Petroc Trelawney, who acts as our TV guide through the programme, promising bats, night revellers, Arabian tales and “the familiar flow of the Danube.”

Josef Strauß - Phönix-Marsch, op. 105 - Josef Strauß’s Phoenix March, written to commemorate the opening of a fun fair, is a light and bright start to proceedings, perhaps signifying a hope for something new to spring from the ashes of the old. A step forward is that there is an audience this year, albeit at half capacity, which makes a good change from last year’s empty hall. It is also good to see that all are masked up.

Johann Strauß II - Phönix-Schwingen. Walzer, op. 125 - The phoenix gets another outing, this time it’s the Wings of the Phoenix in a jaunty waltz by brother Johann. I can’t quite imagine that the mythical bird flaps in 3/4 time but I can definitely visualise it bobbing and spiralling in the sky to this music.

Josef Strauß - Die Sirene. Polka mazur, op. 248 - The Siren polka calls out next, with the harp arpeggios [so, harp-eggios then? - Ed] tinkling like water throughout and a good use of militaristic snare percussion adding an edge to the softness.

Josef Hellmesberger (Sohn) - Kleiner Anzeiger, Galop op. 4 - The first of a trio of pieces related to newspapers and this gallop does indeed set off at a good pace, evoking the hustle and bustle of the printing presses at the Little Advertiser.

Johann Strauß II - Morgenblätter. Walzer, op. 279 - the Morning Papers turns out to be quite a well-known waltz, I just never new what it was called, so you may well recognise it when you hear it. Weirdly, but not untypically for the New Year concert, we get some visual “filler” of a very creepily lovey-dovey couple wandering hand in hand around Vienna on their way home from a night on the tiles. I still don’t understand why they would think we’d not want to watch the orchestra but there you go.

Eduard Strauß - Kleine Chronik. Polka schnell, op. 128 - a little Little Chronicle rounds off this triptych of typesetting and it’s by the youngest of the Strauß brothers. The pizzicato cellos add a nice bounce to this piece, written for the Vienna Press Club ball.

Interval time now and a wander round some of the Unesco World Heritage sites in Austria to highlight the work of Mission Apollo in conserving the highly endangered Apollo butterfly. 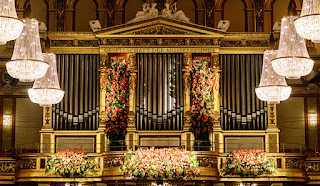 Back to the Golden Hall for Part Two and it goes a bit batty to start with:

Johann Strauß II. - Ouvertüre zur Operette "Die Fledermaus" - aka The Bat, an operetta that I don’t think I’ve actually seen, although I recognise the music from it. Apparently, it is a story of revenge by a man who, dressed inexplicably in a Bat costume, is abandoned, drunk, in the city centre by one of his friends, leading to ridicule and embarrassment, so he is using a ruse at another masked ball to get back at the so-called friend. By the sounds of it, it’s full-on English country house farce set in Vienna, so I’ll seek it out.

Johann Strauß II. - Champagner-Polka. Musikalischer Scherz, op. 211 - the Champagne polka is as bubbly and effervescent as the name sounds, with a wonderfully percussive “pop” at the end provided by the percussion section really opening a bottle of fizz [typical drummers - Ed].

Carl Michael Ziehrer - Nachtschwärmer. Walzer, op. 466 - Night Revellers come next [are these still the drummers? - Ed] in a waltz by one of the “rivals” of the Strauß family. A very militaristic bugle call starts the piece and it feels more like a march than a waltz. The drunken choral section, sung by the orchestra themselves, is a wonderful surprise though. And then the whistling starts… but it soon settles down again to the more traditional waltz time, ending with a clarion of bells and more singing. My favourite piece of the concert and one that I will seek out again, I think.

Johann Strauß II - Persischer Marsch, op. 289 - The Persian March, written to say thank you to the Shah of Iran for Strauß being awarded the Order of the Sun! [He got around did Strauß - Ed] This is another highly recognisable piece of music that I didn’t know the name of and makes good use of the pentatonic scale to evoke eastern influence.

Johann Strauß II - Tausend und eine Nacht. Walzer, op. 346 - we stay eastbound with the music but head to the Schoenbrunn Palace, home to the Habsburgs of Vienna, on screen to watch dancers while the orchestra plays a waltz relating to the tales of a Thousand and One Nights. I must admit I had my doubts before this started but the dancers really were good, the interspersion of classical ballet and contemporary worked very well, and it made a lot more sense than the lecherous couple from earlier.

Eduard Strauß - Gruß an Prag. Polka française, op. 144 - heading back west, northwest in fact, and a piece called Greetings to Prague [even though it is a French polka? - Ed] and one which makes you hear the triangle so obviously that you realise how much you’d miss it if it wasn’t there.

Josef Hellmesberger (Sohn) - Heinzelmännchen - Very festive in name, Elves [ but here think Dobbie the House Elf - Ed] describes the little beings and the story of them doing the housework of all the people in Cologne overnight, until the tailor’s wife wanted to see them and scattered peas on the workroom floor so they would slip and make a noise. This plan backfired though because the elves disappeared after that and the residents of Cologne had to do their own housework from then on. [Typical of one person to spoil a good thing for everyone else - Ed]

Josef Strauß - Nymphen-Polka, op. 50 - from Elves to Nymphs, only this time, the delicately flitting nymphs are humongous great white dancey horses as we’re taken to see the Lipizzaner Stallions do their thing. They were incredibly good but I kind of ignored the music while being mesmerised by their skills.

Josef Strauß - Sphärenklänge (Music of the Spheres). Walzer, op. 235 - Harmony of the Spheres, the final piece billed in the programme is, apparently a favourite of maestro Barenboim and is a dreamily gentle way to round off the official part of this New Year’s Day concert… 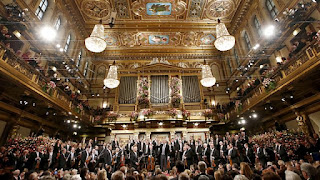 “…BUT” I hear you cry, “there’s still 20 minutes of the TV programme left!” Ah yes. Had you forgotten about the now traditional encores? Like the last night of the proms, there are pieces of Strauß music that are played every year at the Vienna concerts.

First up is “At the Hunt,” a fast polka complete with hunting horns, that rattles along at a fine pace. The maestro then gave a heartfelt speech and hearts are likewise lifted by the beautiful Blue Danube which, I think, must be one of the most recognisable pieces of classical music [that isn’t Greensleeves when you’re stuck on hold to a call centre - Ed]. It swings and sways and ripples along like the river itself and bears another listen, even if you think you know it off by heart because the instrumentation is sublime, especially the woodwind. The really final work of the evening is the rollicking Radetsky March by the most senior Strauß, with the accompanying clapping along of the audience being assiduously conducted as well, so that they come in at the right time in the chorus. As you do.

As the cheers ring round the rafters of the Golden Hall, I really feel like 2022 has started with a very tuneful bang, I’ve found a new composer to look for in Carl Michael Ziehrer and I’m actually looking forward to seeing what the rest of this music-filled year will bring.
Happy New Year!