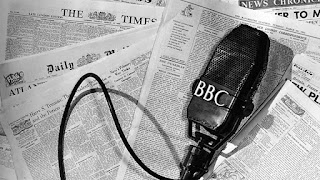 The work sits on a BBC 100 website which also features an interactive year-by-year timeline covering key moments in the BBC’s first 100 years.

The new collections - 100 Objects, 100 Faces and 100 Voices - will evolve and be added to throughout the centenary year of 2022:
100 Objects features some of the BBC’s most iconic items, including technology, props, documents, artwork and buildings – such as the classic BBC microphone; Mr Darcy’s shirt from Pride & Prejudice; the mirror globe used as an early TV ident; and Roy Plomley’s proposal letter for Desert Island Discs - which help tell the quintessential story of the BBC. The objects are curated in partnership with a selected museums, including the Science Museum Group
100 Faces is a new collection of 100 iconic photos from the BBC photographic archive. From correspondents in the field, actors on set, or monarchs speaking to the nation, this is a collection of well-loved BBC personalities and contributors that unpacks the magic and mystery of broadcasting through the years. It is devised with the Radio Times
The 100 Voices oral history collection reveals stories of the men and women who worked at the BBC and created its unique culture. It covers News and Elections; The Birth of TV; Radio Reinvented; People, Nation, Empire; Pioneering Women; Entertaining the Nation; and Planning the Future. This collection is curated in partnership with the University of Sussex, under Professor David Hendy

Robert Seatter, BBC’s Head of History, says: “The BBC has an amazing history which belongs to us all. As we mark 100 years of our BBC, these new digital resources, partner exhibitions, research and publications give a unique insight into the history of the Corporation and provide something to intrigue audiences of all ages.”

In addition to the BBC 100 website, BBC History has worked with a range of cultural and academic partners around the BBC’s centenary. These include various projects with the BFI, one of which, ‘BFI’s 100 BBC Gamechangers’, will chronologically list the 100 BBC TV programmes that changed the landscape of British TV. The list, which will be announced in Spring 2022, is compiled by the television curators and historians at the BFI and led by Lisa Kerrigan, the BFI’s Senior Curator of Television.

Meanwhile, the Science Museum Group, will digitise 1,000 BBC objects for the first time and launch a major exhibition and events programme across the UK. Other regional museum partners will also mark the centenary through collections and displays.

Sir Ian Blatchford, Director and Chief Executive of the Science Museum Group says: “We are delighted to be part of 2022’s BBC 100 celebrations and to be telling the story of a century of broadcasting, as well as looking at the exciting possibilities of broadcast technologies in the future through our Broadcast 100 programme across the Science Museum Group and specifically in our Switched On exhibition at the National Science and Media Museum in Bradford.”

BBC History has also worked with the Arts and Humanities Research Council (AHRC), part of UK Research and Innovation, to create a series of new research opportunities and a new BBC Engagement Fellowship. BBC History will also be an active partner in the Being Human Festival, run by the Council in collaboration with the British Academy, in November 2022.

This year also sees the publication of The BBC: A People’s History by Professor David Hendy, the only BBC authorised centenary history book. It traces the BBC from its beginnings through war, the creation of television, changing public tastes, and massive cultural change. It is based on unique access to the BBC’s rich and comprehensive archives and will be published on 27 January.
Image & info - BBC
Email ThisBlogThis!Share to TwitterShare to Facebook