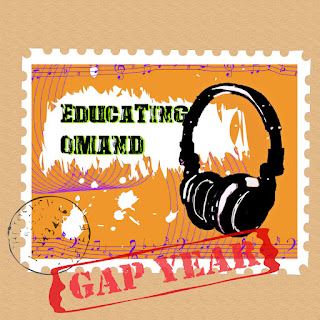 After a year of listening to other people's music suggestions, Susan Omand narrows down her top five ... okay, six... albums from Educating Omand: Gap Year...

As the old song says... "so this is Christmas, and what have you done?" Well, thank you for asking, I've spent the last twelve months listening to SEVENTEEN [count 'em and find all the reviews here - Ed] albums of music suggested by some of our wider DCMG writing team, those wonderful wordsmiths who are regular and occasional contributors to our websites at The DreamCage and AlbieMedia. And it's (mostly) been fun. The albums have run the gamut of genre, from musical theatre to industrial metal, from seventies soul to grunge rock, which beautifully reflects the diverse tastes of our writers [and we wouldn't have it any other way - Ed.] There were albums that pushed me up against a wall and threatened me with a knuckle duster, some that swept me into the sea of pure nostalgia and others that I, well, "just didn't connect with" I think is the polite way of saying it. But they all provided me with an education of sorts, whether it was to blast misconceptions, re-affirm previous loves or just prove that I can sit through a whole album without falling asleep ... well, nearly a whole album. And there was very little that was actually "meh" which is always a plus.

So, on to my top five [you can find the other years' Educating Omand top fives here - Year 1 with added Detention, Year 2, Year 3 - Ed] and yes, this year it has to be a top six. You can blame Marc Nash for that because I couldn't rank his suggestions as one better than the other but knew they both had to be in here - therefore...
5th EQUAL - Joy Division - Unknown Pleasures suggested by Marc Nash

"it made me realise that Joy Division were not the band I thought they were."

"I honestly thought I had listened to the Beastie Boys’ album Ill Communication before.
"I was wrong."
4th - Brand New - Science Fiction suggested by Nate McKenzie
"a complete art experience for me, demanding considerable concentration but rewarding that in buckets"
3rd - Bruce Springsteen - The Wild, The Innocent and the E Street Shuffle suggested by Stuart Mulrain

"I’ve long been a fan of the Boss, so why has it taken me nearly fifty years to listen to The Wild, The Innocent and the E Street Shuffle?"
2nd - Sleep Token - Sundowning suggested by David Ames
"...had me thinking 'don’t spoil it, don’t spoil it' as it went on. They didn’t spoil it."
1st - mewithoutYou - Brother, Sister - suggested by Ruari B
"You know what it’s like when you get goosebumps within the first 5 seconds of listening to an album for the first time? No? Listen to Brother, Sister by mewithoutYou and you’ll know."
"So, Merry Xmas! We hope you've had fun. Another year over and a new one..." just around the corner [I don't think those are the lyrics - Ed]. I've really enjoyed Gap Year but it's time to knuckle down and get serious again for next year. Warning: There may be bagpipes...
Email ThisBlogThis!Share to TwitterShare to Facebook