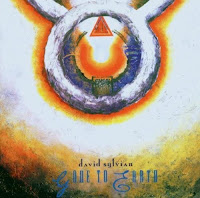 For Educating Omand, Susan Omand has been listening to music that she missed out on first time round. This year, our team of writers suggest albums for her to listen to in Educating Omand: Gap Year. This week, it's Gone To Earth, suggested by Ren Zelen ...

Find the full list of albums for Educating Omand's Gap Year here
Ooh, sneaky Ms Zelen, landing me with a double album for my final* #EducatingOmand listen of Gap Year. I’d head of David Sylvian of course, Japan were HUUUGE in the fledgling New Romantics scene of the early 80s before he went off on his own, but I’d never listened to any of his albums. This collection is his second solo(ish) album release - I say solo-ish because titans of prog Robert Fripp and Bill Nelson both have a hand in writing and performing some of the tracks.

As I said, this is a double album and it really is a listen of two halves, the first two sides having lyrics and sides 3 and 4 being purely instrumental ambience.

Taking the Veil starts off side one of the album and immediately reminds me of To Cut A Long Story Short by Spandau Ballet, which came out six years earlier. It’s also one of only two singles off the album, the other being Silver Moon, but I must admit I don’t remember it. [Little wonder as it only got to no 53 in the UK charts - Ed].

Laughter and Forgetting is next and it’s probably my favourite of the vocals tracks (and not just because it’s short), the piano and brass lending a very laid back jazzy feel to Sylvian’s instantly recognisable voice.

The soundscaping and hefty percussion on Before the Bullfight, is quite epic to begin with, the brass picking up the Spanish sound and bullfighting atmosphere. However, at over nine minutes long, I must admit I found myself tuning out after a while.

The title track ends side one and Fripp’s influence is most definitely to the fore with the dissonant, muddy guitars and almost backward sounding samples lending a real discombobulation.

This “other-worldly” feel continues with side 2’s opener Wave. However, I just found it unsettling and not in a good way as there was too much going on here for me; it was too fractured - it felt neither jazzy nor deliberately clashing, it was just incohesive for another interminable 9 minutes. Sorry, Ren.

River Man comes next and the bassline really reminds me of the start of the late 70’s song Walking On the Moon by the Police, the rhythm and cadence of that two note repetition is an exact match. Unfortunately, that put me off the rest of the song as my head was insistent on singing the Police lyrics.

Silver Moon rounds off side two and was the second single off the album, reaching the heady heights of number 83 in the UK charts [now now, snarky - Ed] with a very middle of the road sounding track that did little to inspire I’m afraid - not even the oh so 80s saxophone solo.

And that’s really how I felt about the first record in total. I didn’t hate it, far from it, but it just didn’t hook me as it maybe should have. Maybe I wasn’t in the right humour for it but I think it’s maybe more because I’m late to the party and/or lack the nostalgia aspect [see Susan’s review of The Goonies on our twin site at The DreamCage for a case in point - Ed] but I felt like Sylvian was trying too hard to be different and cool which made it not cool for me.

However, as I said at the start, this is a double album and sides three and four drop the vocals and song structure for ten tracks of mesmerizing experimental instrumental works. If you’ve been following our TTND articles this year, you’ll know that I’m pretty obsessed by The Orb and I can definitely hear the roots of the electronic ambience that they and their ilk perpetuated into the 90s, just stick a drum machine under it and you’re sorted. Flippancy aside, I far preferred this second half. I won’t describe each song separately as there is very little stand out differentiation between tracks - apart from A Bird Of Prey Vanishes Into a Bright Blue Cloudless Sky where the prayer-bell-like sound is hypnotic. Otherwise, this is 40-odd minutes of music you can stick on headphones and drift away to. It’s effortless while not being annoying and it doesn’t sound like a backing track where vocals have been removed as these things sometimes can. However, it didn’t “paint pictures in my head” as I was hoping it might. It was, however, a pleasant wash of noise and I likely will listen to the second record in the set again as wallpaper.

Am I educated though? Surprisingly, yes, I think I actually am. Not in the “wow” mindblown way that I was expecting, but more in an “I now know what I’m missing” way and I’m safe in the knowledge that I can fill the David Sylvian gap with other things already in my music portmanteau.
* stay tuned for my TOP 5 albums of this Educating Omand year article, coming soon.
Image - Amazon
Email ThisBlogThis!Share to TwitterShare to Facebook