Turn That Noise Down - L7 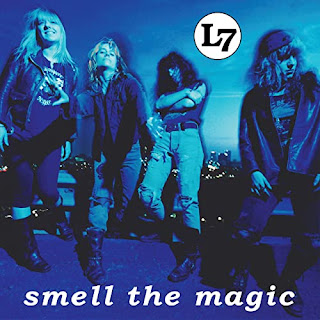 So many well-known albums turn 30 this year and Steve Taylor-Bryant and Susan Omand travel back to 1991 to revisit some of the sounds of their youth that made parents shout "Turn that noise down!" This week, Steve wants you to Smell The Magic of L7...

There’s some dispute as to whether this release from L7 is a 1990 or 1991 release but, since I have the repackaged 9 track version and didn’t pick it up until 1991 when a friend suggested I’d love a female heavy punk band, I’m including it this year. And to be fair L7 are deserving of inclusion every year because my word they are good. I’d enjoyed female led rock music for a while and I’ve already included Hole in this year's reviews. Whilst Hole and the likes of Bikini Kill and the rest of that early 90’s Riot Grrrl era are all great, and I often go back to have a listen, I think the fact that L7 started in the mid-80’s and preceded both grunge and riot grrrl labels makes them a standout act.

Whilst more mainstream fame would come with 1992’s Bricks are Heavy there is something in Smell the Magic that draws you in and grabs hold of your internal organs and mashes them up.

The entire album is all killer no filler (sorry Sum 41) and is punchy and energetic and raw and in your face. It throws misogyny and women’s rights and sexuality at you unapologetically and does so with incredible riffs and musicality. Highlights include Shove, and the awesome American Society but it’s always the furious Fast and Frightening that pleases my ear holes.
Image - Amazon
Email ThisBlogThis!Share to TwitterShare to Facebook