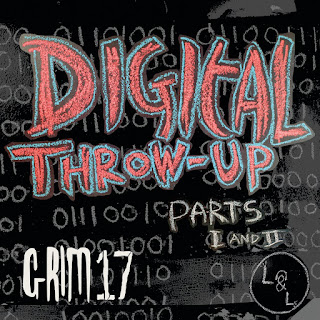 Cue the fireworks! Lights And Lines announce the release today of Digital Throw Up Parts 1 + 2 from the suitably surreal GRIM17. Listen to the first single from it, Guck Huxley...

A collection of past grievances retold and new tales told for the first time, Digital Throw Up Parts 1 + 2 includes nods from GRIM17 to a variety of Electro, Alternative, Folk, and Industrial influences whilst maintaining his own unquestionable independence and individual style across everything he does.

Digital Throw Up is a 2 part album of epic proportions that captures the past and throws it into the future! Part 1 is GRIM17's debut EP - released originally in 2013 - and now lovingly remastered for 2021. A very personal EP this side focuses on feelings of depression, self loathing, and the despair of feeling life was falling apart.

Part 2 is a brand new, never before released collection of songs about coming to in a world that seems very hostile and hard to recognise.
[Here's the first single, we'll have a review of the whole album for you soon - Ed] 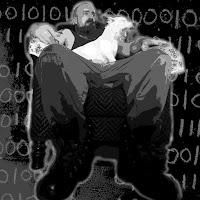 ABOUT GRIM17
After briefly working with artists like Tom Middleton and Neil Cowley Trio, Derry based GRIM17 went on to appear on Ireland's leading Music TV show Other Voices, and be tipped by the Daily Mirror as ‘One To Watch’ in 2014, before taking an unprecedented 5 year break to go drinking... which kind of helped (but not really...)

Returning in 2020 with no less than 2 amazing albums released independently while the rest of the world fell to its knees, The End Is Not For A While and I'm Counting To 3 brought popular and critical acclaim to his work once again.

Earlier in 2021 GRIM17 released the single Practised Taunts, refocusing his work once more before joining Lights And Lines and collaborating as lead vocalist and lyricist on the Awen Veleda EP (released September '21).

Digital Throw Up is available for 3 months as a Bandcamp only exclusive on CD and/or Download and Streaming before being released into the wider world from 28th January 2022.