Song of the Day - Tiger King 2: The TikTopera 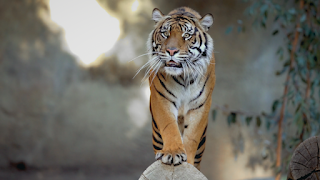 Netflix and the English National Opera have partnered to produce a short online operatic work about something called [checks notes] Tiger King using the digital medium of...  TikTok??? Have a listen (it's only 5 minutes long) ...
Press Release
With yesterday's launch of Tiger King 2 on Netflix, The English National Opera has partnered with the streaming service to produce the world's first operatic reimagining of Tiger King: Murder, Mayhem and Madness (season 1) – brought to the digital stage by Tiger King's biggest fans via their TikTok channels.
With some of TikTok's biggest stars cast in lead roles, Sophia Aurora, Hannah Lowther and recording artist Hellovicco – alongside X-Factor finalists Max and Harvey and BGT comedian Phil Green – each offers an operatic spin on the modern-day melodrama at the heart of Tiger King.
With music recorded live in London by the ENO's 40-person chorus and their award-winning orchestra, newly written lyrics have been set to the music of French composer Georges Bizet's 1875 masterpiece 'Carmen'.

Split into a rollercoaster five-act structure, each song covers the complex interconnected stories surrounding a cast of characters involved in the battle between Joe Exotic and Carole Baskin – following the twists, turns, reveals and revelations that made Tiger King one of the most-watched shows on the planet.
Image - Netflix, info - The English National Opera
Email ThisBlogThis!Share to TwitterShare to Facebook