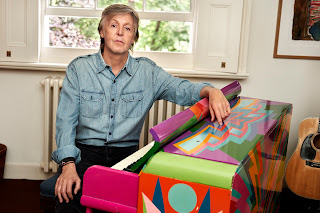 Handwritten lyrics, printed photographs and original memorabilia spanning McCartney’s career reveal the process and people behind some of the most famous songs of all time, from his earliest compositions through legendary decades of The Beatles and Wings to the present.

Featuring around 35 exhibits, highlights of the free Entrance Hall Gallery display include:
Original handwritten lyrics for songs, such as Hey Jude, Pipes of Peace and Jenny Wren, which have never been seen before
An original drawing by Paul McCartney for the Put It There single
Original memorabilia including an early Beatles songlist, a postcard of The Beatles in Hamburg and George Martin’s score for Yesterday
A selection of print photographs taken by Paul McCartney’s brother Mike, wife Linda and daughter Mary

From Yesterday and Hey Jude to The Kiss of Venus and Somedays, there will be audio from the British Library’s Sound Archive to accompany each lyric on display. The Library has one of the largest and most wide-ranging collections of popular music in the world. It contains commercial releases, interviews and live performances from all eras and genres together with magazines, fanzines and books to provide a comprehensive picture of popular music and its history.

Andy Linehan, Curator of Popular Music Recordings at the British Library, said: ‘The British Library is more than just books; we also hold one of the most extensive collections of popular music in the world. It is great to be able to showcase some of our handwritten lyrics and sound recordings alongside previously unseen material from Paul McCartney's own archive in this display. Handwritten drafts of song lyrics have a special quality – they show that initial spark of creativity – and this is a chance for everyone to see the workings and learn the stories behind the songs of one of the world’s most successful songwriters and performers. We hope this free display inspires new audiences – young and old.’

The free Entrance Hall Gallery display accompanies McCartney’s new book The Lyrics: 1956 to the Present, which recounts his life and art through the prism of 154 songs from all stages of his career.

In addition to the copy of The Lyrics: 1956 to the Present that will be sent to the Library as part of legal deposit, McCartney has also donated a signed limited edition with an exclusive print of a lyric sheet, which will contribute to our nation's heritage and inspire future generations.