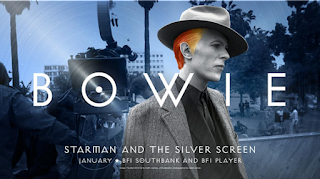 The BFI have announced that BOWIE: STARMAN AND THE SILVER SCREEN, a month-long season celebrating actor and performer David Bowie, will take place at BFI Southbank in January 2022...
Press Release
Originally planned for January 2021, the season’s mixture of feature films, television and documentaries will show that, whether a bit-part, starring role, or being just himself, David Bowie was always magnetic on screen. Films screening in the season will include THE MAN WHO FELL TO EARTH (Nicolas Roeg, 1976), MERRY CHRISTMAS MR. LAWRENCE (Nagisa Ôshima, 1983) CHRISTIANE F. (Uli Edel, 1981), THE HUNGER (Tony Scott, 1983) and LABYRINTH (Jim Henson, 1986), while documentaries, concert films and TV work will include ZIGGY STARDUST & THE SPIDERS FROM MARS (DA Pennebaker, 1979), BAAL (Alan Clarke, 1982), BOWIE AT GLASTONBURY 2000 (BBC, 2000) and a collection of rare TV material from the BFI National Archive. Also screening will be a new video essay by season co-curator Rhidian Davis for the latest series of BBC Inside Cinema; the essay will screen alongside select films in the season, as well as online on BBC iPlayer.

As a composer, innovator and concept artist, Bowie’s fascination for film fed an insatiable creative drive, which the season will explore via a selection of films that influenced him. HOOKED TO THE SILVER SCREEN: BOWIE AT THE MOVIES will feature a range of titles, from 2001: A SPACE ODYSSEY (Stanley Kubrick, 1968) and THE CABINET OF DR. CALIGARI (Robert Wiene, 1920) to QUERELLE (Rainer Werner Fassbinder, 1982) and TAXI DRIVER (Martin Scorsese, 1976).

The season will also see the return of BUG with comedian Adam Buxton, with two David Bowie special editions on 6 and 7 January. Bowie’s engagement with film, theatre and design forged his high-concept approach to pop stardom and supercharged the evolution of music video; BUG Special: David Bowie will be a fan’s journey through the career of an artist whose influence on modern popular culture will continue to be felt for decades, featuring music videos, rare clips, animation and comedy. Following the 7 January event there will be an after-party in Spiritland at Royal Festival Hall, featuring a DJ set from Charlotte Hatherley. On what would have been Bowie’s 75th birthday, 8 January, there will be a special talk – DAVID BOWIE: SO I FELT LIKE AN ACTOR – presented by lecturer, author and Bowie fan Graham Rinaldi. The talk will take an in-depth look at Bowie’s film roles, from leading actor to the briefest of cameos and will also include a full screening of short film JAZZIN’ FOR BLUE JEAN (Julien Temple, 1984).

Some key Bowie titles, including THE MAN WHO FELL TO EARTH (Nicolas Roeg, 1976) and MERRY CHRISTMAS MR. LAWRENCE (Nagisa Ōshima, 1983), and a number of the films from HOOKED TO THE SILVER SCREEN series will also be available for audiences across the UK to watch on BFI Player throughout January as well. It can be hard to look beyond Bowie ‘the star’ to appreciate the characters he portrayed, but six years on from his passing, Bowie’s star still sparkles brightly.

Bowie’s first starring role was in THE MAN WHO FELL TO EARTH (Nicolas Roeg, 1976) as an alien outfitted in human skin who’s forced to come to earth to save his dying planet. Nic Roeg found in Bowie’s eccentricity just what he was looking for – not an actor trying to play an alien, but a lost soul trying to play a human. The film adaptation of Kai Hermann’s controversial biography of a teen junkie and sex worker, CHRISTIANE F. (Uli Edel, 1981), marks its 40th anniversary in 2021. The film positioned Bowie as a brooding god for the alienated youth of 70s West Berlin via his omnipresent image in the film (in which he played himself) – on streets, subways, on vinyl albums passed from hand to hand, and in a live concert within the film. The opening scene of Tony Scott’s THE HUNGER (1983) sets the tone for an impeccably stylish, erotic horror as Catherine Deneuve and David Bowie, stalk across the screen accompanied by Bauhaus’ goth-rock track ‘Bela Lugosi’s Dead’. THE HUNGER focuses on Miriam’s doomed vampiric romances, including one with a sceptical scientist, who becomes the latest subject of Miriam’s primal passion.

Bowie and Ryuichi Sakamoto (another musician-turned-actor) play strangely bonded antagonists in MERRY CHRISTMAS MR. LAWRENCE (Nagisa Ōshima, 1983), a study of brutalisation and repressed desire in a Japanese POW camp. Julien Temple’s ABSOLUTE BEGINNERS (Julien Temple, 1986) is a tale of young lovers divided. Set against a backdrop of generational conflict, gentrification and white supremacy in 1950s London, it is a riot of day-glo production design and anarchic energy featuring Bowie as an ad man who gets a memorable number, dancing atop a spinning globe and an over-sized type-writer. Directed by the legendary Jim Henson, and starring Jennifer Connelly alongside David Bowie, LABYRINTH (1986) was a commercial disappointment upon release and received mixed reviews, but has since become a cult favourite with children and adults alike.

Originally met with universal derision, almost 30 years on TWIN PEAKS: FIRE WALK WITH ME (David Lynch, 1992) has had an exceptional reversal of fortune: the feature-length follow-up to the hit TV series is now heralded as a masterpiece in horror. Featuring a short but impactful appearance from Bowie as Agent Jeffries, this terrifying fever-dream that lives long in the memory is led by a stunning performance from Sheryl Lee. Artist Julian Schnabel’s directorial debut BASQUIAT (1996) is a star-studded biopic of the gifted and prolific painter and street artist Jean Michel Basquiat, who died at the age of 27. Alongside an all-star cast, Bowie plays Andy Warhol, whom he was fascinated with and dedicated a song to on his fourth album Hunky Dory. In THE PRESTIGE (Christopher Nolan, 2006) Christian Bale and Hugh Jackman play rival master magicians on the late-19th century stage, each competing to outdo the other both professionally and in their private lives. Christopher Nolan petitioned Bowie to play the role of Nikola Tesla as he couldn’t imagine anyone else as the physicist, engineer and innovator.

DA Pennebaker had only vaguely heard of David Bowie when he was commissioned by RCA Columbia to shoot a 30-minute film of the star live at Hammersmith Apollo, but realised it could be something much bigger on his arrival at the venue. The truly remarkable concert film ZIGGY STARDUST & THE SPIDERS FROM MARS (DA Pennebaker, 1979), which mixed backstage material with concert footage, captured the moment that Bowie stunned the audience – and his own band – by announcing live on stage it would be the last ever Ziggy show. The first real glimpse of Bowie since the sudden disappearance of Ziggy Stardust is captured in CRACKED ACTOR (BBC, 1975), in which Bowie is followed across LA by a BBC camera crew. Intercut with footage from the Diamond Dogs tour and studio sessions for Young Americans, it’s the fragile silhouette of a man beneath a black fedora in the back seat of a limo that was to enter Bowie iconography, and inspire his casting in THE MAN WHO FELL TO EARTH. Screening alongside it will be a curated selection of rare television materials featuring David Bowie, drawn from the BFI National Archive.

For more treasures from the BFI National Archive, audiences need look no further that BFI Southbank’s Mediatheque, bookable in advance and free to use. Audiences will find a rendition of ‘Heroes’ on a 1977 edition of Marc Bolan’s eponymous Granada TV show, while the ‘Ashes to Ashes’ video gets an airing in MOON DOGS MATINEE (1981). Documentaries include DAVID BOWIE AND THE STORY OF ZIGGY STARDUST (2012), featuring Marc Almond and Elton John among the interviewees and QUEER AS POP (2013), looking at Bowie’s influence on gay liberation.

BOWIE AT GLASTONBURY 2000 (BBC, 2000) shows Bowie making a career-defining return to Glastonbury’s Pyramid stage almost 30 years after his first appearance at Worthy Farm. Bowie performed a set of greatest hits to an adoring audience of 200,000 revellers. For the many of us who are missing live music in these times, this joyful performance is a must-see on the big screen.

Bowie’s long-standing interest in Bertolt Brecht led him to work with the great director Alan Clarke, on BAAL (1982); suitably debauched as the eponymous anti-hero, he lends his vocals to several ballads in Clarke’s fine production of Brecht’s earliest play, about a chaos-creating, unkempt poet who crashes Bavarian high society. The screening of BAAL on 19 January will feature an extended introduction from Adrian Wootton, CEO of Film London and life-long Bowie aficionado, who will take audiences behind the scenes of the making of BAAL with an illustrated introductory talk. BAAL will screen alongside PIERROT IN TURQUOISE OR THE LOOKING GLASS MURDERS (Brian Mahoney, 1970), an STV recording of an Edinburgh 1969 show which saw Bowie perform in a mime and dance work by Lindsay Kemp, who had a huge influence on Bowie’s highly theatricalised stage craft.
HOOKED TO THE SILVER SCREEN: BOWIE AT THE MOVIES

David Bowie’s parents first met in a cinema in Tunbridge Wells where his mother worked as an usher. A formative viewing of THE CABINET OF DR. CALIGARI (Robert Wiene, 1920) at the age of 14 had a great impact and cast a long shadow over Bowie’s imagination, instilling in him a lifelong passion for German Expressionism. Visits to the cinema would prove creative turning points throughout his career, inspiring existing collaborations and sparking new ones. In addition to screenings of THE CABINET OF DR. CALIGARI, there will screenings of METROPOLIS (1927), Fritz Lang’s vision of a futuristic city where workers toil like machine components to sustain the pleasure-seeking lifestyle of a ruling elite. The grandest sci-fi film of the silent era, Bowie would return to METROPOLIS numerous times for inspiration, most fully in the dystopian sci-fi of his 1974 album ‘Diamond Dogs’. Screening alongside METROPOLIS will also be Luis Buñuel and Salvador Dalí's surrealist short UN CHIEN ANDALOU (1929).

Stanley Kubrick’s cosmic sci-fi masterpiece 2001: A SPACE ODYSSEY (1968) was cited by Bowie as the inspiration for ‘Space Oddity’, his first hit. Opening with the dawn of man before voyaging to the limits of the known universe in the company of Dr David Bowman and a sentient computer called HAL, 2001 is now established as a landmark in cinema. Also screening will be Kubrick’s A CLOCKWORK ORANGE (1971), set in a flamboyantly stylised near-future where boisterous gangs of disenfranchised teenagers revel in acts of ‘ultraviolence’. Alex and his ‘droogs’ became cult antiheroes for a generation when the film was withdrawn from distribution amidst accusations that it had inspired copycat crimes. Bowie would copy everything from costumes to poster art in his creation of Ziggy Stardust.

Also screening will be Rainer Werner Fassbinder’s final film QUERELLE (1982), released posthumously after his death from a drug overdose. An adaptation of Jean Genet’s homoerotic novel about a beautiful opium-dealing sailor on shore leave, this dream-like tale of sex, betrayal, murder, and the quest for self-discovery is shot with a highly stylised aesthetic that’s striking and surreal. Screening alongside QUERELLE will be UN CHANT D’AMOUR (1950), the only film from French writer Jean Genet, which was long-banned due its explicit content; Genet’s name influenced one of Bowie’s biggest hits The Jean Genie. Completing the line-up will be screenings of TAXI DRIVER (1976), Scorsese’s iconic tale of Travis Bickle, an insomniac ex-marine traumatised by Vietnam, who is disgusted by the nocturnal New York street life he observes from his taxi. Wowed by the film in Berlin, Bowie would go on to collaborate with Scorsese and Schrader on film projects, including THE LAST TEMPTATION OF CHRIST (Martin Scorsese, 1988), which is available on BFI Player.

Tickets for BOWIE: STARMAN AND THE SILVER SCREEN will go on sale to BFI Patrons and Champions on 6 December, BFI Members on 7 December and to the general public on 9 December. Audience members aged 25 and Under can sign up and take advantage of £3 tickets to any film in the season, available to book in advance or on the day of the screening.
Images & info - BFI
Email ThisBlogThis!Share to TwitterShare to Facebook