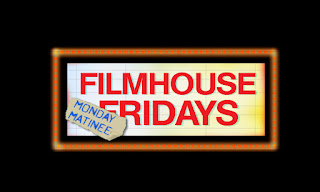 Every Friday, Daniel White takes over the airwaves at the online radio station Incapable Staircase for 90 minutes of some of the best songs used in films, along with "occasionally interesting bits of information." Catch up with Friday's show...
This week Daniel looks back at ickle Daniel's trips the cinema [ahhhh bless - Ed]
Here's the mega nostalgic playlist:
The Heat Is On - Glenn Frey [Filmhouse Freyday then? - Ed] - Beverly Hills Cop
Axel F - Harold Faltermeyer (and not a frog in sight) - Beverly Hills Cop too
Good Enough - Cyndi Lauper (wiv a'itude) - The Goonies
I Get Around [mine's a pint - Ed] - Beach Boys - Flight of the Navigator
A View to a Kill - Duran Duran - Yay Bond is Back!
Neverending Storyeeeeee - Skunk hair ... sorry, Limahl - No, it's not Stranger Things
People Are Strange [DJ's certainly are - Ed] - Echo (echo echo echo) & the Bunnymen - The Lost Boys
[Who You Gonna Call? Ed] Ghostbusters - Ray Parker Jr - I ain't afraid of no ghosts...
Who's That Girl? - Madonna - Who's That Girl? [we just told you, it's Madonna! - Ed]
[ironically, yes, something to do with trains - Ed] Going Loco - The Four Tops - Buster
When The Going Gets Tough - Billy Ocean (and a boat) - The Jewel of The Nile
Man In Motion - John Parr [and his hair - Ed] - St Elmo's Fire
The Lion Sleeps Tonight [oooooweeee-um-wimoweh - Ed] - Tight Fit - Ace Ventura Pet Detective
Addicted to Love - Robert Palmer - Cocktail [mine's still a pint - Ed]
Eye of The Tiger - Survivor - Rocky 4...? 3...? 4...? [3 - Ed]
You're the Best Around - Joe Esposito - Karate Kid (bring back the training montage)
Arthur's Theme - Christopher Cross - Arthur (takes you back don't it?)
Pure Imagination - Gene Wilder - Willy Wonka and the Chocolate Factory [mmmm chocolate - Ed]
A Spoonful of Sugar [mmmm sugar - Ed] - Julie Andrews - Mary Poppins
The Power of Love - Huey Lewis and the News - Back To The Future (it just doesn't date, does it?)
About iNCAPABLE STAiRCASE
iNCAPABLE STAiRCASE is an internet-based community station that is passionate about real radio; unrehearsed and raw, but it is precisely this that makes it so easy to listen to. The station has been running for just over a year and was set up by Bella and James at the start of the first Covid lockdown last year.