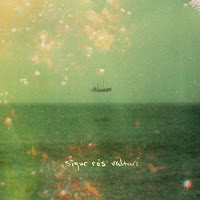 For Educating Omand, Susan Omand has been listening to music that she missed out on first time round. This year, our team of writers suggest albums for her to listen to in Educating Omand: Gap Year. This week, it's Valtari by Sigur Rós, suggested by David Ames ...

I will admit from the start that I had real problems listening to this album, but not for the reasons that you think. I had heard of, and listened to, Sigur Rós before, thanks to the venerable Mr Mike Sambrook being one of my tutors in a previous year of Educating Omand. Last time it was the 2002 Brackets album [read that report here - Ed] so I was keen to see what a decade of evolution had done to the band with this, their 2012 release, Valtari, suggested by the equally venerable David Ames.

Why the problems, then? Honestly, I got so chilled out the first time I listened to it that I fell asleep after track 3. Second try and I thought I’d try it as background music while doing something else, but it kept throwing the odd interesting noise at me and I couldn’t concentrate on either thing. It was only on the third time of trying and a lot of concentrated effort that I made it to the end successfully, but I did enjoy it.

I’m not going to do a track by track of the album though - I’m not sure I could! Unlike my wander through weirdness in the Brackets album, I didn’t find that this one painted nearly as many mind pictures for me and the music is difficult to put into words; it was all very pretty, very ambient and I just let it wash over me without trying to grasp on to anything. One thing I will say is that it has a weirdly Enya-esque feel for me. Maybe it’s the ethereal vocals, of which there are a lot more than I remember from previously - this is not necessarily a good thing in my book. But there were moments that made me sit up and take notice, as I say, and these are mostly the introduction of odd instruments like the electronic tinny scrape and weirdly plinky thing (see I did say the music was difficult to describe) in the title track, which pulled me out of the dwam [a good Scottish descriptor - Ed] I had settled into.

As far as whole songs go, though, the, literally, organic nature of Dauðalogn (translates as Dead Calm) with a cappella voices over stripped back organ chords has a very Celtic “old religion” feel to it* and is probably my favourite track on the album. I was interested to read later that the choral work here is done by The Sixteen, which likely explains a lot for my enjoyment of it.

Am I educated though? I’m not sure. I did like the album but I’m not sure I’d listen to it again (even if I could stay awake). It’s polished and pretty to listen to but it lacked engagement and WOW moments for me. I’m slightly disappointed, if I’m honest, about how “mainstream” it felt and that the band doesn’t live up to the envelope-pushing avant-garde artistry of a decade earlier. It’s like they’re trying too hard with this one, which is a shame.
* Addendum: It was only when I went looking for a video of the song to add to the article that I found the one below - it is part of a collection of 16 short films made for the Valtari album as a Mystery film experiment. This is exactly what I meant by the Celtic “old religion.”
Image - Amazon
Email ThisBlogThis!Share to TwitterShare to Facebook