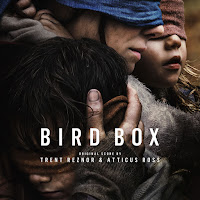 For Educating Omand, Susan Omand has been listening to music that she missed out on first time round. This year, our team of writers suggest albums for her to listen to in Educating Omand: Gap Year. This week, it's the filmscore of Birdbox by Trent Reznor and Atticus Ross, suggested by Daniel White ...

I don’t know if, when listening to a soundtrack album, it’s better to have seen the film beforehand or not. It’s definitely makes a difference for me, either way. Like reading a novel after watching the film adaptation, listening to a soundtrack after I’ve seen the film colours my appreciation of the non-visual medium, bringing specific imagery to mind and adding an extra level of understanding about what they were trying to convey. However, it also curtails my enjoyment of the music for its own sake for those same reasons; I can’t NOT see the scenes and the characters from the film in my head. Bird Box lands somewhere in between the two. I haven’t watched the film but I’ve seen and heard enough through press releases, reviews, trailers and clips to know the basic premise, so I knew the kind of thing I was going to hear when I gave Daniel’s suggestion a first listen.

What I wasn’t prepared for was how different it was to Reznor and Ross’ other work. You see, I only really know their music from the industrial rock of early Nine Inch Nails and this really isn’t that at all. The album opens with a 12-minute epic called Outside that is pure avant garde classical. The minimalist piano riff is haunting, floating as it does over a bleak wind noise. Section by section the rest of the orchestra adds their own snatch of atonal richness as the storm rumbles on in the background. The brass section is particularly discomfiting and the chanting, when it kicks in, is incredible – intriguing and frightening in equal measure – and the birdsong and the buzzing at the end unsettles even more.

Next up is Undercurrents and it lives up to its name as you can feel the suspense building with the almost “white noise” [no pun intended, Daniel – Ed] effect of the synth drone/feedback over a simple arpeggio. This feeling changes abruptly with the beautiful, but incredibly melancholy, Looking Forwards and Backwards. The piano keeps time as strings and synth layer gently over the top in a Bladerunner-esque way. I still found something disturbing in there though – it may be the off-tone strings that unsettled me. It’s strings to the fore again in What Isn’t Anymore with plinky pizzicato insistence over a rolling synth underlayer. The buzz of the bassline adds a syncopation to the rhythm that makes it sound more complex than it actually is.

The piano returns in Sleep Deprivation with atmospheric synth draughts and a wonderful minor shift. Again it manages to built suspense without being too obvious – no change of pace or shock tactics, just that disconcerting background noise. Careful What You Wish For continues the feeling with Doppler strings/brass and clicky percussion leading to the haunting piano again. This time shock tactics are deployed though, with an almost siren-like feedback wail half way through that puts you on the defensive. Another change in mood with A Hidden Moment; it’s a lovely gentle arpeggiated piece that, actually, set me on edge more than others because of unresolved anticipation of “something”. That something arrives in And It Keeps On Coming which is an aural onslaught at the start before dropping off again, only to rebuild once more. It reminded me of the Jaws theme and not just because of the low repeating bass phrase. Close Encounters is next, and is probably my favourite track on the album as it evokes visual imagery for me (not anything to do with the film) in a similar way that music by The Orb does and the shift in tone midway through is almost Orwellian, superb stuff. Last Thing Left is, appropriately, the last thing left on the album and rounds it out in a very quiet, downbeat way, while still leaving that taste of existential dread in the background.

This is definitely a “soundtrack” album, in that some of the tracks felt a little long and repetitive but that is to be expected. As a soundtrack, it is there to evoke emotion and, presumably, fit the film, but it really does bear listening to as a standalone ambient album in its own right. I mean “ambient” in the sense that it creates an atmospheric environment, not that it is relaxing chillout music because it definitely is not. But, am I educated this time? Yes, absolutely, and in two main areas. Firstly, I know how amazing Reznor and Ross are as classical/film composers in their ability to play with emotional response and, secondly, I know not to listen to this album just before bedtime again… #nightmares.
Image - Nine Inch Nails website
Email ThisBlogThis!Share to TwitterShare to Facebook