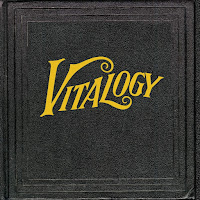 For Educating Omand, Susan Omand has been listening to music that she missed out on first time round. This year, our team of writers suggest albums for her to listen to in Educating Omand: Gap Year. This week, it's Vitalogy by Pearl Jam, suggested by Steve Taylor-Bryant ...

I need to start with a warning… if you adore Vitalogy, if it’s way up there in your all-time favourites list, the best thing since ever, you’re precious about it and won’t hear a word against it, leave now. Go and read something else. I’ll wait…

Ready? Ok, here's the thing... I wasn’t blown away. Didn’t hate it (well, mostly), but I didn’t love it either though, and that really disappointed me.

Steve is my bestest buddy and he’s been praising this album, and Pearl Jam in general, to the skies for as long as we’ve been friends, so I was really looking forward to giving Vitalogy a listen because he has, otherwise, pretty decent taste [apart from in friends, obviously - Ed] and this should have been something really special. A world-shattering experience. A grunge-epiphany if you will. It wasn’t. And it took me several listens to work out the reason why.

Here’s the reason. I’m thirty years too old for this album.

I know, I know, I can hear you saying “of course you are, it came out in 1994, listen it like you were in your 20s again.” I get that but, even back in 1994, I would have been thirty years too old for this album because I’ve heard it all before. In my late teens and early 20s, I was listening to rock music… 1960s rock music. And this is just that but updated a bit, as they do when trends come around again. In fact, when I read back my notes after the first few listens of the album, for song after song I had written down names of specific 60’s rock bands, even specific songs in some cases. The Rolling Stones mostly, but The Byrds, The Doors, The Beach Boys, hell, even The Monkees got a mention (Whipping sounds pretty much exactly like (Not Your) Stepping Stone in bits). They were the kind of bands I was already listening to back then, so yes, this was good, solid rock but nothing new.

There are three exceptions to the rule. Pry, To is the first inkling of something a little different, a single minute of fading in and out noise, and it caught my attention because of it. Bugs is by far my favourite track. Reminiscent of Harry Nillson’s The Point (an album I adore and spent about ten years searching out after I heard a single snippet on a late night radio show back in the day), it’s totally off the wall and truly experimental, spoken word Nola blues with junk shop accordion to the fore, and it seems to have been the one hated most by critics at the time for that reason. However, the third track that stood out on the album did so for all the wrong reasons; how f***ing IRRITATING is Stupidmop?!?! Oh good grief, seven and a half minutes of whiny kids voices and grating guitar feedback just set my teeth on edge and it goes on for so long that it morphs into a continuous white noise that is topped off by my brain screaming for mercy. I tried to find something interesting to latch on to with it, to give it some sense and context, but it took me all my time to make it to the end of the song just once; in subsequent listens I had to skip it halfway through to save my sanity (and to save my PC from being thrown out the window).

So yes, Vitalogy is a mostly good rock album, just not the “new and original, life changing” thing that I was expecting from the hype it been given over the years. So, Steve, am I educated? I honestly don’t know - yes, in that I now know what you’re talking about and I probably will listen to it again (apart from that one track), but no, in that I didn’t learn anything new, it’s what I was listening to anyway back then but in a different guise. More to the point, am I still your friend? Steve? Hello??
Image - Amazon
Email ThisBlogThis!Share to TwitterShare to Facebook