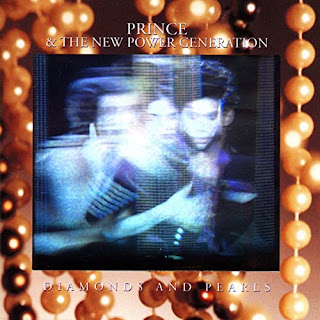 So many well-known albums turn 30 this year and Steve Taylor-Bryant and Susan Omand travel back to 1991 to revisit some of the sounds of their youth that made parents shout "Turn that noise down!" This week, Susan remembers the treasure that is Diamonds and Pearls...

I have written about Prince so many times before for AlbieMedia. From a look back at Sign o the Times, to Graffiti Bridge, to a tribute to the man himself from the day that still hurts my soul, when he died. So there’s not really a lot left for me to say about Diamonds and Pearls… but I'm going to anyway.

Always interesting and innovative but, dare I say it, Diamonds and Pearls is not my favourite Prince album, probably because it’s rap heavy, which, for me, dates the album more than the funky backing does. However, the purple-meister could do no wrong in my eyes and there’s something to commend and comment upon in every track.

The album opens with, literally, Thunder – reverberating percussion undercuts a tight vocal harmony with unexpected piano in among the guitar. Daddy Pop is pure funk, with the Hammond organ making it sound so seventies and yet fresh and new. The glorious title track comes next, followed by Cream which is so rocky it sounds like it should have been on the Batman soundtrack, released two years before. Strollin’ is, if you pardon the pun, a complete change of pace, with easy listening lyricism. Willing and Able has a real Paul Simon sound to the backing which contrasts well with Prince’s falsetto tones. Gett Off is another of SIX singles which, for a 13-track album, is a pretty decent ratio and, to be honest, it’s probably the best known one apart from the title track. Walk Don’t Walk is a lot more complex musically than it sounds on the surface, with interesting samples and sound effects adding layers of richness. Jughead has a pure gospel introduction which disconcerts before the rap heavy verse. Money Don’t Matter 2 Night is another song that sounds inconsequential on the surface but the lyrics, if you listen to them, are so very bleak. Push is another funky Batman clone while Insatiable is a seductive ballad, so at odds with the track before. The album rounds out with Live 4 Love and a metallic countdown that signs off on a high of spoken word, rap, samples and screams that echo the wailing guitars.

Yep, ever the innovator, this could never be “just another Prince album” because there is no such thing. For one thing, it introduced The New Power Generation to the world, along with the vocals of Rosie Gaines on the title track which is full of twinkly fairytale pop and sugar-coated bombast.
Image - Amazon
Email ThisBlogThis!Share to TwitterShare to Facebook