Turn That Noise Down - Primus 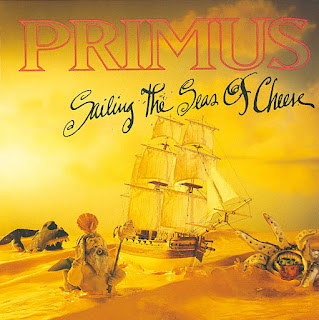 So many well-known albums turn 30 this year and Steve Taylor-Bryant and Susan Omand travel back to 1991 to revisit some of the sounds of their youth that made parents shout "Turn that noise down!" This week, Steve is on deck for Sailing the Seas of Cheese...

Primus are a band for whom everything aligned just perfectly. Being a different type of music to what every other label was beginning to release, being signed by Jimmy Iovine’s new label project Interscope where artists had free reign to do what they liked, and being one of the few signed at the time so they actually had a marketing budget. If the timing was even slightly off, if Interscope had not started recently, or had more than one other artist to push, then we maybe wouldn't have got Seas of Cheese which, admittedly, isn’t for everyone but it really tickles my happy bits. A bit Red Hot Chilli Peppers, a bit Faith No More, a bit too funky funny in the era of grunge to succeed, but somehow the album overcame the odds to make a decent fist of success.

I love most of the album, Here Come the Bastards probably a highlight, but there is much to enjoy. Some really prominent bass on every track, interesting drums and switching time signatures, and all around great musicianship make up a little for maybe some lyrical deficiencies here and there but 30 years later and I press play and my smile is still as big as it was back then. Sailing the Seas of Cheese may not be as classic as some albums released in 1991 but it still demands a seat at the table.