Turn That Noise Down - The Liverpool Oratorio 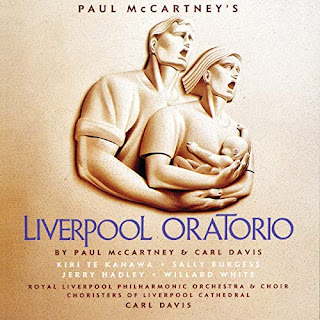 So many well-known albums turn 30 this year and Steve Taylor-Bryant and Susan Omand travel back to 1991 to revisit some of the sounds of their youth that made parents shout "Turn that noise down!" This week, Susan tries something new ...

Oh boy. Where do I even start with this? My love of opera and oratorios is well known; almost as well known as my dislike of anything Beatles/McCartney related so, when Paul McCartney’s Liverpool Oratorio came up on our 30-year retrospective list, I thought I’d set myself the challenge because I’d never listened to it before and maybe, being a format that I love, it would give me a whole new insight into McCartney. I now have listened to it. All one hour and 37 minutes of it. And now I’m conflicted.
So here are my three main thoughts:

1) throwing opera singers at something, even those with as much operatic heft as Kiri te Kanawa and Willard White, does not make it an oratorio. While I can see this would make a fantastic stage musical in the vein of Les Mis or Phantom, or pretty much any other Andrew Lloyd Webber production, it’s wrong to call this an oratorio. This subject is not religious [no matter what McCartney fanatics may say - Ed], the presence of the choir is minimal rather than a main role and there is far too much “theatre” in the character interaction – an oratorio should be a story not a drama.

2) Lyrically it feels very trite and, for me, overly simplistic in subject and form – the rhyming schemes are basic and it feels oddly patronising because of that. Having an aria about “Where’s My Dinner” is a prime example:

“Where’s my dinner? I've been working hard all day
And a man can work up quite an appetite that way.”

3) The music does exactly what you expect it to and telegraphs the narrative in a very cliched way. Scary bits sound scary, suspenseful bits sound suspenseful and love-y bits sound... well, you get the idea. This will be satisfying to some and provides good, easy to sing-along to sections. It is also very Beatles-y in feel – think Sergeant Pepper and you get the idea, simple jaunty little melodies with blasts of brass and smooth strings.

So why the conflict?

The question is - If it wasn’t by Paul McCartney and/or wasn’t called an Oratorio would I be less critical of it? And the answer is “Probably.” It is difficult for me to remove the expectations that those two things put in place. It does sound like a McCartney work and is redolent of Liverpool because of that, which is as it should be – it tells his life story after all. There are shades of Beatles songs in the short repetitive note structure and the simplistic lyrics. There’s a bit that sounds like Live and Let Die, there’s even a hint of the Frog Chorus in there.

I've said that it would make a great stage musical and I think that’s how it should have been produced. Looking at it that way, all my negatives above become positives. You don’t go to a musical at the theatre to be challenged musically, which sounds weird but you know what I mean. You don’t want the music to take away from the spectacle on the stage by doing interesting and unexpected things on its own. You also expect your emotions to be played with in a cliched way, knowing when to be happy, or sad, or tense. And you want to come out of the performance at the end satisfied with the result and humming “the song” on the bus home.
Image - Amazon
Email ThisBlogThis!Share to TwitterShare to Facebook