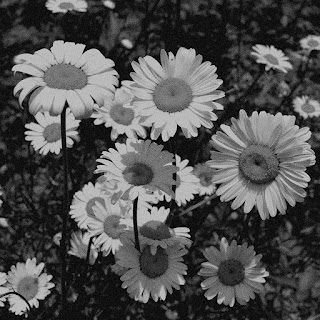 The self-titled debut LP from Ontario band Karloff will be released this Friday (October 8th) thanks to No Funeral Records. Ruairi B gave it a listen...

Karloff, also known as William Henry Pratt, was one of the most influential and truly iconic figures in horror media, known for his portrayal of Frankenstein’s Monster and Imhotep, as well as his extensive filmography spanning decades of film serials and horror anthologies. Now, it appears he’s re-animated and back from the dead once again in the current year, this time to make post-hardcore/ screamo-revival. Quite an avant-garde career decision, needless to say.

Not to be confused with the German heavy metal band of the same name (who, incidentally, also released their debut album this year), Karloff is a Canadian band which, in their words, pull influences from “Jeromes Dream, Slint, Modest Mouse, Hella, Orchid, Envy, City of Caterpillar, Daughters, Merzbow and many more”, comparisons which indeed make me very excited, but also concerned about how often I think about Envy on a daily basis; I suppose it’s an all-too-easy way to get my attention. This article isn’t going to quell that habit, because the influence of All the Footprints You’ve Ever Left and A Dead Sinking Story are strong here.

I can say the rest of the artists they’ve listed are also prevalent in one way or another (though I feel the Modest Mouse one is stretching it a bit). That being said, if I had a penny for every time a band cites “Merzbow” when they indulge in a light spattering of harsh noise, I’d never have to worry about rent again. I yearn for the day when someone credits Masonna, Incapacitants or KK Null for a change.

Said noise influence is where we begin with the aptly named “Untitled”, kicking us off with some audio samples, flurrying drums and guitar feedback, before erupting into a more decipherable mix of dissonant riffs ripped straight from the skramz era. We then kick into the main meat of the album with Abrir Los Ojos, as all the aforementioned facets meld into one with the addition of searing, Frail Body-esque vocals that often can’t be understood but remain painfully expressive.

While all this is serviceable, the general style on offer has very much been done before; avid listeners of the genre will catch on to that very quickly. However, this certainly doesn’t mean Karloff is a write off. While I plugged Envy very early on, it’s worth noting that they abandoned this raw style fairly quickly in favour of more grandiose compositions, and Jeromes Dream, City of Caterpillar and Orchid were hardly around long enough to wear out the sound for anyone other than dedicated fans of the era. Yet, I suppose the debate comes in regarding Karloff’s recency, with the early-2000s ethos of “I’m inspired by Orchid because they’re a big part of my music scene and I want to go further” becoming “I’m inspired by Orchid because I like the style and want to pay homage” in 2021. Ultimately, Karloff falls into the latter. But is this wrong? That depends on the consumer, and whether they want more toast and jam as opposed to toast, jam, peanut-butter, marmite and whatever else might or might not taste good, depending on the chef.

That being said, I don’t mind the taste of the former, and from that perspective Karloff provides well-enough, with some modest hints towards further experimentation despite their core crutch being somewhat derivative. Not only that, but they deliver a tightly constructed album devoid of drag, with each song flowing into one another seamlessly. This is 24-minutes of meticulous, disciplined musicianship; the frugal pacing is its greatest strength, and a similar reason why Frail Body’s A Brief Memoriam was so memorable (pun intended). If only this was a philosophy that Touché Amore decided to stick with beyond their third album.
One of the record’s more fascinating highlights comes in the duo-track midpoint of Fortune Harbour and Ocean or Another. Fortune Harbour begins in the same vein as the blistering tracks before it with a hint of poignant melody, before building up to an emotive climax that cuts to a bizarre, angular guitar phrase that loops for the remainder of the run-time, gently accompanied by a rumble of static. Melodic guitars are gradually added in to create a fluid transition to Ocean or Another, which stands out as a unique spoken-word cut reminiscent of mid-discog Envy or even Slint’s Spiderland. This transition isn’t needlessly extensive and provides a wonderful balance between jagged noise and sombre melody. It’s bold, experimental, and absolutely wonderful; not many bands can pull this off successfully, and it’s to Karloff’s credit.

Ocean or Another highlights a narrative about unrequited love, going emotionally bankrupt, and not wanting to experience feelings anymore. On first impression, this struck me as a genre standard and fairly uninteresting; I was hoping more for the meta-introspection of Is Survived By or the tongue-in-cheek commentary of Dance Tonight! Revolution Tomorrow!, but there might be more to the concept than at face-value. Regardless, Karloff convey this with absolute earnestly, and arguably render those potential shortcomings unimportant in the same way Envy’s language-difference doesn’t quell their passion. Plus, the actual core sound on display is much to my liking; there’s something about twangy, lightly overdriven minor chords, tension-building drumming and confessional spoken-word vocals that provide a feeling of escalation that’s distinctly alluring. It’s a crescendo that pays off, too, as Karloff erupts into catastrophic misery in the final third of the song, the atmospheric chords now heavily distorted and picked aggressively, continuing to become more piercing to match the equally manic drums and vocals.

This post-rock-esque dynamic is something that City of Caterpillar, Funeral Diner and Envy would play with for entire eight-to-ten-minute compositions or even entire albums, and Karloff have managed to present it in such a succinct way that I can’t help but be impressed. Due to the economical album length, these dynamics either appear briefly in singular songs, or are totally contained within this mid-point; I would argue this only adds more to their poignancy.

Conceptually, Glass (Half Full) feels like the logical climax to the themes explored on Ocean or Another, featuring a female spoken-word passage amidst the dissonant instrumentation detailing struggles with an alcoholic boyfriend, perhaps giving clarity to the album’s themes (the track title also being a play on words regarding this). Perhaps the spoken vocals on the prior track were intended to come from the boyfriend’s perspective, justifying his destructive lifestyle by numbing himself to his deteriorating relationships. Since the vocals are usually indecipherable, I can only guess.

The rest of the album follows traditional skramz formula for the most part, but it’s notable that Karloff’s ugliest sounds are saved until last. Hibiscus is a delight of disquieting guitar phrases and dynamic drumming, exchanging melancholy for raw anxiety and foreboding. Some of the riffs contained here are the most aggressively cathartic on the record. The Sweetest Candy brings the album to a close with another cacophony of musical angst and spoken audio, before the slamming of a door brings all music to a halt, allowing the album to naturally loop over once again from the introduction. Personally, I find this abrupt method to be a much more interesting way to close the record than, say, an ambient passage or a noticeable period of silence. Instead, Karloff strongly encourage you to listen to this album more than once in a sitting.

Aside from derivation, there’s generally not much I have to complain about with Karloff’s debut; the real flaws relate to whether you’re subjectively tired of this sound or not. I disclaimed early on that nothing here is remarkably original or made with the intention of pushing the skramz sound into unique ground, save for a couple of winks to noise influences that exist as the exception, not the rule. Yet, if that attitude was to determine the product as “bad music”, then the number of offenders we’d have across genres would be overwhelming. I also think Karloff’s gentle ambition to use harsher, angular sounds compared to their contemporaries piqued my interest more than other screamo-revival bands; I would love to see them take their noise influence further for the next album, maybe with added power electronics, contact mics or tape loops. They could get really creative with this if combined with their already-erose riffing. At the present time, however, their core sound doesn’t offer anything fully realised that moves the genre forward, at least not to the extent that Envy or Funeral Diner tried to do.

Another issue could perhaps be attributed to the vocals, more specifically the vocal indecipherability hindering any kind of coherent introspection. But, again, I would disagree with this, as it was never seen as a detriment to Pg. 99, Orchid or countless others within the genre. Still, I suppose Circle Takes the Square or Touché Amore do it better.

Karloff have released a promising debut album. It’s blistering, emotive and cathartic, but its main strengths lie in its concise, no-filler structure, resulting in an excellent front-to-back listen with exceptional replay value. While they haven’t reached the success of bands like Frail Body just yet, Karloff show potential to experiment with uglier sounds rather than the bittersweet sensations of the former, giving me confidence that the band can find a more unique identity rather than just being an imitator. Even so, the album is still worth a spin if you’re keen on the style.

Review Copyright Ruairi B – ©Ruairi B 2021 All rights reserved.
You can also pre-order Karloff from BandCamp. You get 2 tracks now (Hibiscus and Ocean Or Other, streaming via the free Bandcamp app and also available as a high-quality download in MP3, FLAC and more), plus the complete album the moment it’s released on October 8th.
Email ThisBlogThis!Share to TwitterShare to Facebook