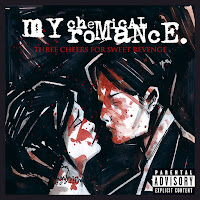 For Educating Omand, Susan Omand has been listening to music that she missed out on first time round. This year, our team of writers suggest albums for her to listen to in Educating Omand: Gap Year. This week, she gives Three Cheers for Sweet Revenge, thanks to a suggestion by Ren Zelen ...

As that song from the Foos says, “I have a confession to make.” It’s taken me three attempts to listen to Three Cheers For Sweet Revenge by My Chemical Romance all the way through. The first attempt was a few years ago, when Ren sent me the CD as a gift. I put it on in the background to listen to while I did some housework and then went and did something else. When I eventually came back into the room, the CD had finished and I hadn’t really heard any of it so it went back in the case and got forgotten about. (Sorry Ren)

The second time was earlier this week, when I realised it was next on my list for #EducatingOmand, so I (literally) dusted off the CD and tried again.

First up is Helena, which reminded me of why I wandered off the first time. It just really doesn’t hook me in (sorry again, Ren). The whiny vocals over music that does what you expect it to. It’s not “just noise” per se, there is melody there, but I find it a bit “meh” and definitely a bad choice for the start of an album imho - yes, it probably is the most commercially accessible track on there, but the worse for it, I think.

Give 'Em Hell, Kid is far, far better. There’s a hard punk edge to both backline and vocals and the occasional plinky noises are intriguing. I also adore the distorted guitar that adds a woodgie [tech term - Ed] effect. This is my favourite track on the album by far, and not just because it follows a bad start.

Then we get to To The End and I got stuck again. Don't get me wrong, the start of it is superb, there’s a lot going on in the background as well as a very chair-danceable topline. But, two minutes in, there’s a guitar riff which reminded me of something classical and I just couldn’t think what it was. I rewound and listened again. And rewound again and listened again, again. And I found that I couldn’t move on til I knew. So I spent the rest of the afternoon looking for where that one riff came from, searching Google (difficult with no lyrics) and trying all the YouTube performances I could think of, all to no avail. I ended up texting AlbieMedia’s acknowledged font of all musical trivia, film composer and radio DJ Daniel White, to get him to listen to it. Within seconds the answer came back - Bach’s Toccata and Fugue in D Minor. As soon as I read that, it clicked. I usually listen to Bach’s Toccata as an organ work but, back in the day, a supergroup called Sky, featuring classical guitarist John Williams, also did a rock cover of it and it was that I was remembering. So, thank you Daniel for saving me from a sleepless night of mad, distracted humming.

However, by then, I’d run out of writing time, hence needing three attempts, but I did finally get to listen to the rest of the songs yesterday.

You Know What They Do to Guys Like Us in Prison is next and a real change in style for the intro, with chuggy keys providing the only backing to the boppy vocals before the guitar kicks everything up a gear. Even then, there’s a lot going on with this song - the backing wanders around different time signatures and keys as the vocal does something different over the top. This works really well, being complex without going muddy.

I'm Not Okay (I Promise) passes the Old Grey Whistle test from the start with a very hooky melody that would fit well into the charts of recent years and would be excellent to sing along to at a festival. The a cappella in the middle is stunning too.

The Ghost of You is a change of pace, much smoother to start and likely the closest to a ballad we get on the album, with stripped back verses balancing a richly-layered, well-orchestrated chorus.

The blend into The Jetset Life Is Gonna Kill You is sublime and I love the thumpy percussion on this one, which adds a visceral rumble to proceedings, and is beautifully counterpointed by the tinkly twinkly keys in the middle.

Interlude is just that - a minute of classical guitar and haunting vocal that messes with your head because the harmonics are deliberately off.

The thunder returns in Thank You for the Venom. The key change into minor in the middle eight is very well handled and adds extra interest to what is, essentially, a solid rock song.

The cowboy whistling at the start of Hang 'Em High is a great nod to times past and contrasts wonderfully with the thrash drums that follow it. Again, the dualling (or should that be duelling) of the guitar melodies through the mid-section add complexity without being confusing.

In a similar way, It's Not a Fashion Statement, It's a Deathwish maybe suffers a bit from coming after Hang ‘Em High because it seems a bit musically bland by comparison but it’s still very listenable.

I love the drums at the start of Cemetery Drive and the keys add an undercurrent of 70’s disco funk to a post-punk song. No seriously, they do. If you’re not listening for it, you’ll miss it.

I Never Told You What I Do for a Living rounds out the album in suitably raucous style. The guitar feedback is glorious and the tempo changes are deft, leaving me with a big smile.

So, yeah, I’m definitely counting myself as “third time lucky” - this is a much better album than I thought it would be. The “emo” label that I’ve always associated with MCR has, for me, has a lot of pre-conceptions - dark, feeble, monotonic, teenage angst - none of which I got here, at least not musically. I must admit that I didn’t really listen to the lyrics, which may well be all of the above, but I will go back and listen to Three Cheers for Sweet Revenge again, and more of their work, now I’ve got past all of my hurdles. Because of that, yes Ren, you can count me as educated this time.