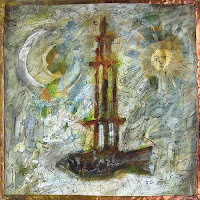 For Educating Omand, Susan Omand has been listening to music that she missed out on first time round. This year, our team of writers suggest albums for her to listen to in Educating Omand: Gap Year. This week, she discovers mewithoutYou's 2006 album Brother, Sister thanks to Ruairi B ...

This album was the suggestion of our metal guru Ruairi B, who is known around the office for listening to music that we ancient ones class as “just noise” [to be fair, anything after the turn of the century is “just noise” to you - Ed.] So I must admit I had put off listening to it for as long as I could, because I was afraid of what I might face and it was with much trepidation that I put the virtual needle on the record.

You know what it’s like when you get goosebumps within the first 5 seconds of listening to an album for the first time? No? Listen to Brother, Sister by mewithoutYou and you’ll know.

The opening of Messes of Men is utterly stunning with almost spoken-word poetry over sounds of running water. It’s a fantastic way to start an album and had me hooked from the get-go. The Dryness and the Rain is next with a wonderful chant-like chorus to counterpoint the spoken verses. Wolf Am I! (and Shadow), as well as having a superb title, manages to be shouty without being raucous – it shouldn’t work with the chorale, the back line rhythm and the guitar all fighting against each other with different time signatures but oh it really does. Yellow Spider is such a gentle little ballad in comparison and the almost Gallic-accordion style melodica backing is delightfully surprising and surprisingly delightful in equal measure. A Glass Can Only Spill What It Contains may be the most commercial song on the album, in that it does pretty much what you want it to do, from the anticipatory intro through the satisfying rock backing and emo poetry vocal. But that is no bad thing and gives some breathing space before the second half.

Nice and Blue (Pt Two) pleasingly has no Pt one and starts off a bit shouty but the woozy slide on the backing vocals tones it down and I love how muffled it becomes by the end of the track. This is also the song where I started to notice how retro the guitarwork is. It reminds me of very early U2 (which is a good thing) in its tinny sparseness – think New Year’s Day and you have the idea. The Sun and the Moon is Gothically monotonic without being too monotonous with a good bassline and percussion. Orange Spider makes a happy little companion to the earlier Yellow Spider… until you listen to the words. Gosh that’s dark. But I love the brass. C-Minor adds an incredibly catchy undermelody riff to the spoken-word verse and the harmonics on the chorus are very clever, adding extra colour. In a Market Dimly Lit starts as scenically evocative, again with the melodica sound adding a shadowy intimate feel, which is gloriously offset by the shocking brashness of the guitar and the end of this song took my breath away. The next song, O Porcupine, has one of the best titles and a drumline that is very My Sharona to start with and the percussion just gets better, with a superb drum solo in the middle. Unexpected pauses, harmonic disharmony and punk poetry all add to the enjoyment. The triptych of arachnids on the album is concluded with Brownish Spider - the harp is very unexpected - and it’s a really intriguing choice to have treated what are, essentially, three verses of a single song in such different ways. In a Sweater Poorly Knit rounds out the album with a strong mix of styles that reflects all that has gone before and leaves me battered but elated by the end.

I can categorically state, even now, that this is my album of this Educating Omand year because it will take a whole lot to beat it. It’s stunning and TOTALLY not what I expected as a choice from Ruairi. The amount of artistry in the music alone is incredible, with chiaroscuro contrasts, fascinating orchestration and gloriously unexpected rhythmic twists that just delighted my senses. But it’s the vocal styling of Aaron Weiss (yes, I had to go looking for his name) that is so utterly addictive for me. It shouldn’t be, because it wanders around being in/out of tune in a way that should be REALLY annoying, bordering on being whiny at times, declamatory at others. It reminds me of a young Neil Young crossed with Fred Schneider of the B-52’s, just with the added tortured poeticism of Jim Morrison of The Doors. If that makes any sense at all. Suffice to say I just love this whole album so very much and you need to listen to it.

So, am I educated? Oh, heck yes! I had never even heard of the band before now, never mind actually listened to them, but this fact puts me at a dangerously indecisive moment. It’s like when I watched the film Natural Born Killers in the cinema. It completely blew me away and instantly became one of my favourite films but I’ve never, ever watched it again after that first time. Why? Because I’m scared that it will shatter the illusion and not be as good. Likewise with mewithoutYou – a very big part of me wants to go and investigate that whole of their back catalogue and see exactly what I’ve been missing but there’s that little voice at the back of my mind that is scared in case anything else of theirs isn’t as utterly perfect as Brother, Sister is.
Image - Amazon
Email ThisBlogThis!Share to TwitterShare to Facebook