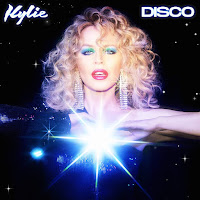 For Educating Omand, Susan Omand has been listening to music that she missed out on first time round. This year, our team of writers suggest albums for her to listen to in Educating Omand: Gap Year. This week, she hits the dancefloor with Disco, as suggested by Paul Robinson...

I’ve written about Kylie albums before for our 30-year retrospective [here and here – Ed] but I must admit I hadn’t really listened to any of her newer music since the great gold hotpants revival of 2000. That’s over twenty years ago now! [What?! When did that happen? – Ed] so I was pleased to be given the excuse by Paul Robinson [no Neighbours connection – Ed] to listen to her newest album, Disco.

As the name neatly suggests, it really is a disco album and all the retro-feels are there – the lightly groovy electronic drumbeats, the simple synthy bop tunes, including oh so 70s tinkly bits, and Kylie’s sugary vocal floating over the top. It takes me right back to the late 70s and standing in rows in the school hall that time the gym teacher decided to try to teach us “proper” disco dancing before one of the school discos – Brooklyn Bus-stop, Hustle, Car Wash, the lot. It’s amazing how much this creaky old body actually remembers…

However, I digress. What I was going to say was that, even though the sound is perfectly retro, these are not cover versions, the songs are all new but they really work with the aesthetic. The album starts really well with Magic, one of the singles, Miss a Thing and Real Groove providing a non-stop chair-dancing marathon. Monday Blues though is as far from blues as you can get, being a happy clappy latin-beat heavy dance-floor filler. Supernova is probably the most back-in-the-day-Kylie-ish song on the album with a Stock Aitken Waterman feel to the production that overpowered a song that could have been Starship Trooper good if it had been left minimal. Say Something creeps more into the 80s than the 70s for its sound but was the first and the biggest of the three singles on the album, so it’s understandable that it is more mainstream. However, we get back to the full-on 70s vibe with the very Abba-esque Last Chance which reminded me so much of Voulez Vous in the chorus that I started singing it instead. The synth strings sweep at the start of I Love It is perfect and will give DJs nightmares trying to mix it. Talking of which Where Does The DJ Go is next and wrong-footed me with its stunning piano intro but it soon settles down again into another high bpm floor filler, complete with added woo-woos (you’ll know it when you hear it.) Dance Floor Darling is probably the most modern sounding song on the album, likely due to the heftier backing that is guitary rather than synthy. Unstoppable is the penultimate track on the non-deluxe version of the album and is pure Whitney – imagine How Will I Know with different words and you get the idea. The album rounds out with Celebrate You which is as close as we get to a smoochy ballad so it’s fitting that it’s the last song of the night to unleash one’s “swishy skirts slow dance” moves to.

I was interested to see, in my “not just the wiki page” research for this article, that the album is getting a revamped re-release next month, so soon after the original release. Called Disco: The Guest List Edition, the songs have all been redone as remixes or duets with “names” from today such as Dua Lipa, Jessie Ware and Years and Years. Oh, and one name from back in the day in a duet I’m really looking forward to hearing now, as Gloria Gaynor adds her considerable disco heritage to a new song "Can't Stop Writing Songs About You" so that should be good.

Am I educated this time though? Well, “ish” I think. To be honest I likely wouldn’t have listened to the album had it not been for Paul’s insistence but, now that I have, I’m glad I did. It’s not a game changer or a show stopper for me but it was never going to be – I was there the first time around for disco fever – but it did bring back a lot of happy memories (and sore bits the next day after dancing) and it re-cements Kylie for me as the ever-evolving princess of pop.
Image - Amazon
Email ThisBlogThis!Share to TwitterShare to Facebook