Turn That Noise Down - The Red Hot Chili Peppers 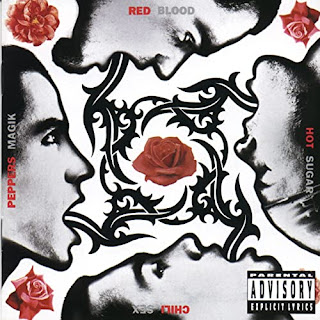 So many well-known albums turn 30 this year and Steve Taylor-Bryant and Susan Omand travel back to 1991 to revisit some of the sounds of their youth that made parents shout "Turn that noise down!" This week, Susan casts some Blood Sugar Sex Magik... [wait that sounds wrong - Ed]...

Ahhh The Red Hot Chili Peppers (or the Chilis to those who were there at the time). Not, I hasten to add, to be confused with The Red Hot Chili Pipers, like one of my social media buddies did, getting all excited about one of the biggest bands of the 90s playing their local town for a really cheap price. I can just imagine the look when a bagpipe band rocked up on stage instead!

But what of the album itself? From the start of Blood Sugar Sex Magik, with its opening track The Power of Equality and the Chilis now-trademark jangly guitar sound, was a revelation for me at the time, compared to what had gone before in the 1989 album Mother’s Milk; a lot less metally, but without losing the heavy rock sound of Flea’s incredible bass-playing, this is a much more melodic album and the music underscores some stunning songwriting from the band. Moving on, the wah-wah sound of the guitar in If You Have to Ask, one of five singles on the album, is much deserving of the whoops and applause in the background. Breaking the Girl, another single, reminds me of The Who’s I Can See for Miles in rhythm but is almost Zeppelinesque with its flutey interludes. Funky Monks is, indeed, seriously funky and is probably my favourite track on the album that’s not one of the better known hits. Again, Flea’s incredible bass stands out for me (due, no doubt, to my first boyf way back in the 80s being a bass guitarist so I’ve been picking out basslines ever since). Suck My Kiss [yes the word play is probably intentional – Ed] is yet another single that you likely don’t remember because it’s not one of the “big two” from the album, which come later. I Could Have Lied is a complete change of pace from the raucous rocking in previous tracks, starting with a stripped back acoustic that isn’t overpowered as the rest of the track builds but really showcases Anthony Kiedis’ glorious voice (yes, I have a bit of a thing about his voice, deal with it) and, for me, foreshadows Under the Bridge. The strident stomp of the intro to Mellowship Slinky in B Major smashes through the subtlety of the previous track with not so mellow, but ever so cool, funk which tends towards Footloose in bits [seriously, it does – Ed].

The Righteous and the Wicked makes full use of discordance and feedback to add a disconcerting edge, leading into one of the two best known songs on the album. This song was EVERYWHERE back in the day with mosh pits forming in any location that played it with that Give It Away, Give It Away, Give It Away Now chorus. However, its fame hides a musically very interesting track, with sudden contrasts and disorienting Mellotron adding a psychedelic vibe. The hippie dippie feel continues with the title track, as the close harmony in the overlaid guitar and Kiedis’ growl just drips lava lamps and shag pile, reminiscent of Hendrix back in the day. The other huge single is next and the utterly heart-breaking Under the Bridge, which also cemented the band’s mainstream recognition, even though the choir is seriously annoying [even more than Pink Floyd’s Another Brick? – Ed] and that was before All Saints got their hands on the song [the less said about that the better – Ed]. Naked in the Rain isn’t, as you might think, a cover of the Blue Pearl song of the same name from a couple of years previously, but is instead a guitar heavy number, with almost jazz-like solos. Apache Rose Peacock is next and is one of the best lyrical/poetic descriptions of New Orleans that I’ve heard with the brass in the background just adding to the atmosphere. The Greeting Song is, by contrast, pure hair metal, girls and cars and totally inconsequential fun. My Lovely Man is, on the surface, another helping of pure funk but, when you listen to the words and know that it was written in memory of the Chilis guitarist Hillel Slovak, who died of an overdose in 1988, it takes on a whole new level of sad. Sir Psycho, though, is pure Kiedis; eight minutes of overblown bombast with everything thrown at it and I love the falsetto/bass contrast in the vocal harmony. Rounding out the album is the only track not written by the band – just over a minute of… well, I’m not sure what exactly… but written by the Delta blues legend that sold his soul to the devil, Robert Johnson, and it neatly underlines the fact that the Chilis are indeed Red Hot.

I’ve got to be honest, when I started playing Blood Sugar Sex Magik as a background to writing this article, I had forgotten how good it was and, by the end of it, I was in love with the band all over again. Where have those 30 years gone?
Image - Amazon