Turn That Noise Down - Dire Straits 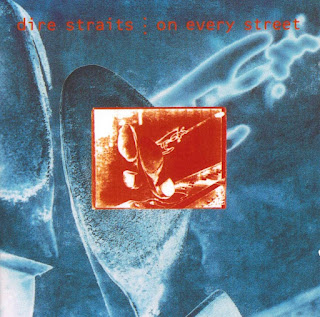 So many well-known albums turn 30 this year and Steve Taylor-Bryant and Susan Omand travel back to 1991 to revisit some of the sounds of their youth that made parents shout "Turn that noise down!" This week, Susan gets in some Dire Straits On Every Street...

In my experience, nobody really remembers the 1991 Dire Straits album On Every Street - it's certainly not the album that immediately springs to mind on mention of the band. I think it suffers by a) being the release after the seminal Brothers in Arms in 1985 and b) being the final studio album released by the band, probably because of a). To be honest, I only really know it because my mother was a huge Dire Straits fan, as well as being a bit of a completist as far as her album collection was concerned. That said, though, it’s really not too bad at all, it's just been a while since I listened to it.
The big hit single is, of course, Calling Elvis, with its song lyric Easter eggs and it’s frankly bizarre Thunderbirdsy video (which, incidentally WAS co-directed by Gerry Anderson!) and it is still a bop and a great way to start the album. The tempo slows and the rhythm guitars are replaced by piano chords for the title track On Every Street which really reminds me of Brothers in Arms and is heartbreaking because of that. When it Comes to You could have easily been a country song, with its strict tempo, steel guitar and “everybody left me and the dog died too” style of lyrics. Fade to Black, by contrast, is just gorgeous - jazzy blues, with brush percussion and stunning guitar work. The Bug lifts the mood and the tempo again with some good old rock n roll and the very modern sounding You and Your Friend rounds out side one of the album (yes, I’m listening on vinyl – parental completist, remember.)
Heavy Fuel opens side two with possibly the rockiest song on the album, with fun, dirty guitars and extra cowbell. After that, the contrast is stark with Iron Hand, which is very Celtic folky with a political edge. Ticket To Heaven is completely unexpected too, with its orchestral backing and light Latin American rhythm that graced the dance-floors of the early 1950s before Rock and Roll raised its head. My Parties is ultra-cool with its spoken lyrics over jazz brass backing that harks way back to the Sultans of Swing. Planet of New Orleans is a near-8-minute long proggy epic (complete with Hammond organ arpeggios) that reminds you just how darned good a guitarist Knopfler is and How Long is a sweet and simple little foot-tapper for the end.
So, yeah, it’s been a while since I sat and listened to it start to finish and, yeah, I think it still stands up as being “a Dire Straits album” and is an okay sign off for a band that never sold out their sound. Is it mind-blowing? No. But, as the follow up to the incredible Brothers in Arms, it was never going to be.
Image - Amazon
Email ThisBlogThis!Share to TwitterShare to Facebook