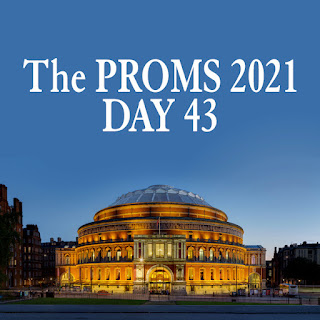 It's back to back Bach between yesterday's prom and today's. Yes, the penultimate prom of the season is another masterwork by Bach. Or the same song 31 times over, depending on how you look at it, because that's what the Goldberg Variations are; a very lyrical aria followed by literal variations on the theme.

It's all the fault of the Russian ambassador to the court of Saxony who, plagued with insomnia, liked to have some gentle music played to him through the night. To this end Johann Goldberg, a young protégé of Bach's, travelled with the ambassador to play for him. One trip, the ambassador mentioned that he'd like some Clavier music so Bach stepped up to the plate with the 18th century version of an easy-listening playlist.

The variations themselves are quite... erm... varied. Originally meant for a two manual harpsichord (that's one with two sets of strings where the notes on the keyboard can be altered by changing which strings are plucked by the keypress) the melodies go from a simple right hand to multiple cross handed playing. We get baroque dances, canons, arias and arabesques. Time signatures change from marches to polonaises to waltzes. The constancy is mostly in the bassline and chord progressions although the key changes too. When Bach calls it a 'Variation' he really means it!

For today's clip though, we're keeping it simple with the initial (and final, as it is repeated at the end of the piece too) aria. Enjoy the purity, here played by Lang Lang, then get ready for all the pomp and pageantry that will be tomorrow's Last Night of the Proms!