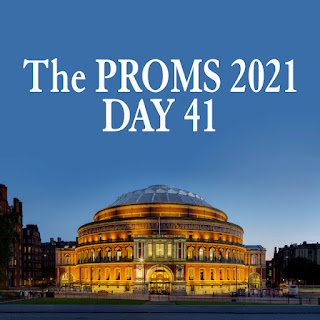 Oh I do love Mahler's work, it's so utterly depressing and melancholy, and his Symphony No 5 is especially so, with the main theme in the first movement being a funeral march! And that's before we even get to the sublime 4th movement, the Adagietto. This is scored for strings and a harp and is often played as a stand alone piece much slower than originally intended with such heart-rending lamentation. This feeling of sadness is, for me, compounded by the fact that it was the piece played by orchestras around the world after the death of my favourite conductor Leonard Bernstein who, in turn, had conducted a performance of it in memory of his own conducting mentor, Serge Koussevitsky. So expect some tears before bedtime tonight.
Thankfully for our general wellbeing, we start the evening in a much more festive mood, literally, with Shostakovich's Festive Overture. From the sizzling brass fanfare at the start to the climactic flurry at the end, it is a masterpiece of orchestration which belies its hurried conception. It was composed after a panicked last minute commission by the conductor of the Bolshoi Theatre Orchestra who realised they didn't have a piece of music to mark the 37th anniversary of the October Revolution at their upcoming concert THREE DAYS LATER! Ulp.
But please indulge me, for today's clip, as I sob my way through Mahler's Adagietto under the baton of the much missed maestro Bernstein. [If you want something happier to start your day, here's the Festive overture instead - Ed]