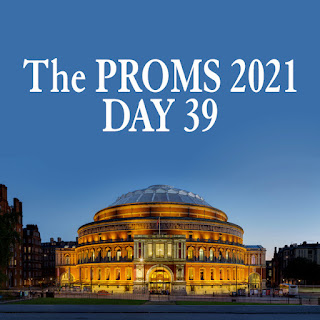 Continuing our daily coverage of what's on at The Proms 2021, Susan Omand takes a quick look at today's Proms...
It's easy seen we're into the final week of this year's Proms season as they're really starting to pack them in now, with no fewer than TWENTY SEVEN different pieces of music [count 'em below - Ed] spread between today's two proms.
So, no, I'm not going to say something erudite about each separate work today [do you ever? - Ed] but will instead look at each prom as a whole. Viardot, for whom the first prom of the day is named, is not a composer that I know but apparently she was one of these annoying people who was good at everything she tried. She was fluent in six languages, sang mezzo-soprano opera, played piano well enough to be considered a concert pianist and composed, arranged and taught music in a variety of different styles throughout her long life in the 19th century.  She also seemed to know, or have a connection to EVERYONE who was anyone in the music world at that time, from Gounod, to Berlioz to Mozart himself. The afternoon prom, therefore, includes work, not just by her, but by a lot of her friends, like Chopin with whom she duetted on the piano, Liszt with whom she took music classes as a kid and Fauré, to whom her daughter was briefly engaged. Oh, and Manuel García, her father. And María Malibrán, her sister. And... well, you get the idea.
The evening prom is a good bit more modern, promising work by Arvo Pärt, Philip Glass and Olivier Messiaen amongst others. I'm really looking forward to Einojuhani Rautavaara's Cantus arcticus which uses Arctic birdsong on tape as one of the instruments in the orchestra. Today's clip, still on a birdlike theme, is the tiny but utterly sublime A Sparrow Alighted Upon Our Shoulder by Jóhann Jóhannsson.

Pyotr Ilyich Tchaikovsky
My genius, my angel, my friend! (2 mins)

Jóhann Jóhannsson
A Sparrow Alighted Upon Our Shoulder (3 mins)