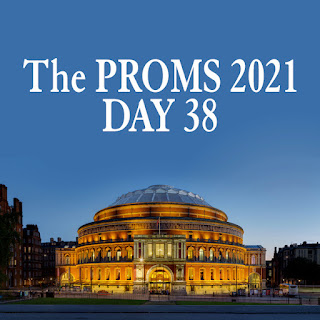 Continuing our daily coverage of what's on at The Proms 2021, Susan Omand takes a quick look at today's Prom...
There's a lot of complexity in today's prom. We start with a world premiere of a new work by former BBC Young Composer winner Grace-Evangeline Mason. Inspired by the artwork of Clare Celeste Börsch, a Berlin-based artist who uses collage techniques to build imagined worlds filled with foliage and fauna, Mason's Imagined Forest promises fragments of melody and fleeting imagery, like the torn pieces collaged together in the art, contrasting with tumbling phrasing and stark silences, reflecting the dense undergrowth and sudden clearings in a forest. Should be interesting, anyway.

It's to another Mason next as Sheku Kanneh-Mason indulges us with Dvorak's Cello Concerto. This was the last solo Concerto written by Dvorak and, apparently, one that surprised even himself because his hatred of the cello as a solo instrument is well documented.

After the interval, we get 17 minutes of utter romance, both literally and figuratively, as that most Romantic of composers, Richard Strauss, wrote his tone poem about the lovelife of lothario Don Juan. However, instead of presenting him as a cad, Strauss' Don Juan is penned as a desperate soul, looking for the love of his life, and there is as much melancholy as there is seduction.

The final work of the evening is a complete change of pace as we get Hindemith's Symphonic Metamorphosis. For me, rather than a good idea badly executed, this is a bad idea from the start but Hindemith made the best of it. The initial project, which was to be a ballet, fell through when the choreographer wasn't happy with the "not strict enough" arrangements of the chosen Weber piano pieces. It was later rehashed to include themes from Weber's incidental music for Turandot (same story but different telling to the much more famous Puccini opera) and was eventually released in 1944 as a "novelty" piece for four hands at a piano. Incidentally, the balletic idea resurfaced in 1990, when new choreography was added but this was deemed by critics to be "more notable for its abundance of steps than for its clarity of structure" Ah.

But it's back to the Cello Concerto for today's clip because, well, cello. Listen to the heart-rending second movement and think about what it would have been like if Dvorak had actually liked the sound of the instrument!
Here's the full programme for today's Proms which you can listen to live on Radio 3 or on the iPlayer
Grace-Evangeline Mason
The Imagined Forest (12 mins) BBC co-commission with Royal Liverpool Philharmonic Orchestra: world premiere