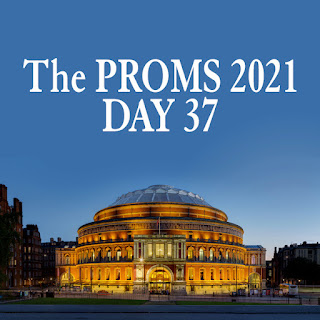 Continuing our daily coverage of what's on at The Proms 2021, Susan Omand takes a quick look at today's Prom...
Tonight's Evening Prom will be televised on Thursday 9th on BBC Four
Can you believe that this time next week, we'll be looking at the programme for the Last Night of the Proms? The time has really flown by, hasn't it? [For you maybe... - Ed]. However, back to today because they're really packing in the music with two different Proms to look forward to.
The Morning Prom sees us heading for the organ loft and paying tribute to Saint-Saëns in a programme that recreates elements of his own legendary performances on the Royal Albert Hall organ in both 1871 and 1880. First up is one of those pieces of music that you don't know the name of but you'll recognise as soon as you hear it with the triumphal Coronation March by Meyerbeer. This is followed at a much more sedate pace by Bach's Fantasia and Fugue in C Minor, the initial low drone on which is stunning and gives me absolute goosebumps. The tempo is upped again with the first movement of Widor's Symphony no 5, which I didn't know beforehand but found the build quite enjoyable on a listen through. We finally get to the man, Saint-Saëns, himself with the penultimate piece of the morning and his Fantaisie No 1 which is beautifully expressive, as you'd expect from such an impressionistic composer. The list is rounded out with Liszt and his own Fantasia and Fugue on "Ad nos, ad Salutarem undam" (Come to us, to the waves of salvation) from Meyerbeer's opera Le Prophète, the same opera that started us off today, thereby bringing us full circle. Neat eh?

The evening Prom sees us back with a full orchestra and first up is The Batman. No, really, it's Strauss' Die Fledermaus overture... which, in German, makes him The Bat man. Oh never mind. Next up we get Seven Early Songs from Alban Berg, all of which were written, yes, early in his composition journey, when he was still under the tutelage of Arnold Schoenberg and his mentor's influence can be clearly heard. We head into the interval with an astonishingly un-Ravel-like Ravel work called Le Valse, which George Benjamin described, in his written analysis of the piece, as plotting "the birth, decay and destruction of a musical genre: the waltz." Better known for his film scores, post-interval sees a performance of Korngold's only symphony which runs the gamut of emotions, from stormy intensity to profound introspection to a light of hope for the future, in a very cinematic way.

But it's back to Bach for our clip today because that initial bass note is just utterly sublime...

Here's the full programme for today's Proms which you can listen to live on Radio 3 or on the iPlayer
Organ Recital - 11:45