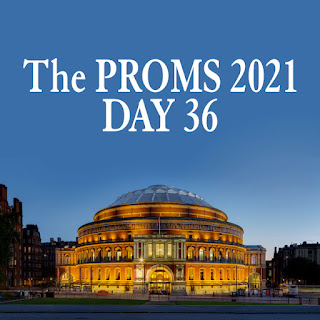 Never mind your fancy jazz, film music or Baroque n Roll [I see what you did there - Ed], there's some proper classical heft to tonight's composers. Starting after the interval and working backwards, because I can, we get some Mendelssohn and his Scottish Symphony. This is not to be confused with the very famous Fingal's Cave (his Hebrides Overture) but it was inspired by the same trip that Mendelssohn made in 1829 to tour Scotland, and this time he was inspired by his visit to the ruins of Holyrood Chapel at Holyrood Palace in Edinburgh, quoting in a letter that "Everything is ruined, decayed, and the clear heavens pour in. I think I have found there the beginning of my "Scottish" Symphony." Yup, it rains on everyone's holiday to Scotland, pal.
Just before the interval we get Schumann's Piano Concerto in A Minor. Even though you don't recognise the name, you're highly likely to recognise the music as it is one of the Romantic period's more widely played works. As an interesting aside, one of its early performances was actually conducted by Mendelssohn!
Today's clip, however, comes from our first piece of the evening and the Coriolan Overture by Beethoven. Despite the name, this overture was not, as is sometimes claimed, written for William Shakespeare's tragedy Coriolanus, but instead for an equally tragic play by an Austrian dramatist called Heinrich Joseph von Collin, although both works are about the ancient Roman leader Gaius Marcius Coriolanus, whose real fate remains undocumented.

And a quick nod too, here, to my all-time favourite conductor [doesn't everyone have a favourite conductor?! - Ed] Leonard Bernstein.
Here's the full programme for today's Proms which you can listen to live on Radio 3 or on the iPlayer

Felix Mendelssohn
Symphony No. 3 in A minor, 'Scottish' (40 mins)
Image adapted from NORTH-FACING ENTRANCE OF THE ROYAL ALBERT HALL AT DUSK © David Iliff
Email ThisBlogThis!Share to TwitterShare to Facebook