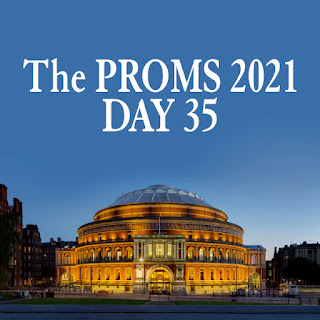 Continuing our daily coverage of what's on at The Proms 2021, Susan Omand takes a quick look at today's Prom...
Get yourself a bucket of popcorn [salted of course - Ed] and settle in for an evening at the movies, although it's not the modern Hollywood movie themes you might be expecting. There's no John Williams, No Hans Zimmer, not even an Ennio or an Elfman. For these are from the golden days of the silver screen when buckles were swashed,  kitchen sinks dramatised and Femmes fataled - all of which means that you, like me, have probably never even seen some of these films.
First up we head for Sherwood Forest and a Robin Hood overture from 1954 that neither rides through the glen nor spends 16 weeks at the top of the charts (looking at you Bryan Adams). Then we literally have Hobson's Choice [i.e. no choice at all, take it or leave it - Ed] about the music that comes next, and a suite of music from another 1954 film, Hobson's Choice. Something you may recognise, if you're a film buff [or used to watch the Saturday matinees on TV back in the day - Ed], is The Cruel Sea theme which is next on our list. Escape Me Never, a suite from the 1935 film by William Walton, rounds out the first half of the evening.
After the interval, if you're a horror fan, you'll love the really freakish music from The Skull (1965) by Elizabeth Lutyens. If you're not a horror fan, then spend an extra five minutes getting your interval ice-cream and get glowered at by the usherette who has to show you back to your seat in the dark, because this music is highly disconcerting.  Thankfully this is well balanced by the epic swoop of William Alwyn's music for the 1947 noir film, Odd Man Out. From mystery to history and The England of Elizabeth, a 1957 documentary about 1557 [ok, I know it should be 1558 but it looks neater being a round 400 year difference - Ed] with music from the venerable Vaughan Williams.
But it is the final piece of the evening that our clip is from today, here introduced by Timothy West, and a... shall we say... "spirited" rendition of Malcolm Arnold's The Belles of St Trinian's.
Here's the full programme for today's Proms which you can listen to live on Radio 3 or on the iPlayer