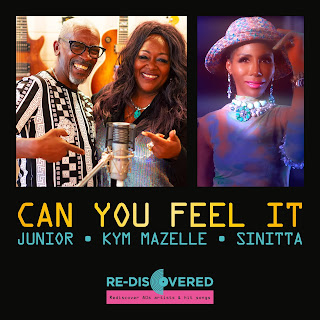 Nothing says Friday more than ... a new Sinitta record? ...

Friends Sinitta, Kym Mazelle and Junior Giscombe aim to unite us with ‘song’ as they come together for the first time ever, to re-record their version of the Jackson classic Can You Feel It, released on 15th October, alongside their new album Re-Discovered.

For Sinitta, Kym and Junior, Can You Feel It was the obvious song choice during this 40th anniversary year of the track, because each one of them had a personal connection to the song; which bound them together as one.

‘It’s all in the lyrics,’ says Sinitta, ‘Can you feel it now, the whole world’s coming together now’….and we are. After the pandemic months of being apart, there’s a real vibe across the UK that people are learning how to be with each other again. We wanted to express that in song.’

The trio came together in the studio last year to record tracks for the forthcoming Re-Discovered album, a pioneering compilation where stars sing their favourite track of all time from other artists.

‘It was the feeling of being together that overwhelmed us the most,’ smiles Junior. ‘We couldn’t express how we felt, we just kept saying ‘Can you feel it’? So this track seemed to almost be the anthem to how everyone feels right now.’

Kym Mazelle adds, “Growing up in our home town of Gary, Indiana, and playing on the same street as Michael and the Jackson 5, we all used to sing and dream about the future. The expression ‘can you feel it’ was a phrase we often used, to try to convey our shared excitement when something great happened to us. When The Jacksons scored their first ever TV show, it was electric, we all bounded into the street and us kids were all saying ‘can you feel it?’ as we vibed off each other in that moment. So for me, this song is the absolute epitome of joy and coming together in the same moment as your fellow human beings.’

Junior Giscombe’s personal story is even more mind-blowing, ‘I met Michael Jackson for the first time backstage during the Bad Tour, when Kim Wilde and I supported Michael,’ reminisces Junior. ‘He called me to his room and explained that he’d stolen some dance moves from my Mama Used To Say video, for his Thriller video. So we busted a few moves in his dressing room and Michael used that same expression to share the moment, ‘Can you feel it?’ he asked. I knew what he meant, he was saying that the power of dance and song is mammoth when the two come together.’

The single by Sinitta, Kym Mazelle & Junior ‘Can You Feel It’ is released on 15th October 2021 and the album ‘Re-Discovered’ is released simultaneously on Right Track / Universal.