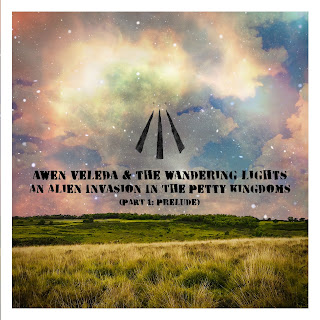 Out now on Bandcamp, and coming to streaming platforms in November thanks to Lights & Lines record label, An Alien Invasion in the Petty Kingdoms (Part 1: Prelude) is the debut EP from Awen Veleda & The Wandering Lights. Listen to the first single, Lucrezia...

Set in ancient times An Alien Invasion in the Petty Kingdoms (Part 1: Prelude) tells the story of an unexpected event unfolding through the voices of various characters, all scrambling to understand the truth and agree what to do.

This unique 5 track Contemporary Folk EP explores how people deal with the unexpected, manage change through their own beliefs and context, and find ways to work together.

On receiving a message telling him of a less than ordinary heathen attack, the King holds an impromptu Witan with his closest generals who council him to take action immediately. The Red Ealdorman sets off to raise an army and has to convince his enemy - a Celtic Chieftain and his tribe - that they must join forces! Meanwhile the King resorts to consulting the old ways of magic and superstition for guidance on what to do next.

For the longer version, check out the liner notes on Bandcamp [and buy the EP while you're there! - Ed] 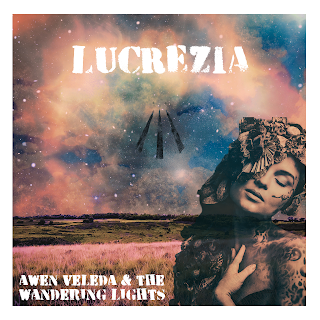 The EP's lead single Lucrezia is available immediately to stream and/or download on Bandcamp now, before being released on streaming services from 24th September.

Lucrezia comes to us at a point in the story where the King, struggling to uncover the facts of the situation and separate them from rumour and superstition, realises that unusual challenges usually require creative solutions. He concludes that to achieve the greater good you sometimes have to do something bad, and contacts the priestess Lucrezia to see if her visions can offer guidance - whilst praying to his own God for forgiveness...

About The Wandering Lights collective:

The Wandering Lights is a fluid collective of collaborators made up of independent musicians from all over the world. The debut EP is based on an original concept and music by Mike Five, and features fellow Lights And Lines artist GRIM17 throughout as lead lyricist and singer.

The EP also includes backing vocals by Gemma Kirk of Lost Chimes and Iona James, Fiddle by Becca Wright of Buffos Wake, Harmonica by Ron Bowes, Flute by Rae Cameron, and joint lead vocals and lyrics on Lucrezia by Sadie Rae of Until Further Notice. String arrangements were added by One Blind Mouse who also mixed and mastered the tracks.
Images - Lights & Lines
Email ThisBlogThis!Share to TwitterShare to Facebook