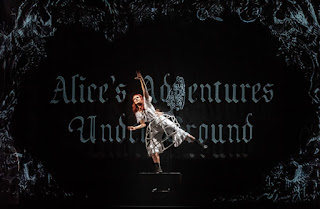 Fun, furious, frantic, and utterly fantastic - The Royal Opera House will stream Alice's Adventures Under Ground in November...
Press Release
In association with Irish National Opera, a new, specially filmed version of Alice’s Adventure’s Under Ground premieres from 19:30 on Friday 5th November 2021 on the ROH website and it will be available for 30 days afterwards On Demand. Priced at £7, and less than an hour long, this short, sharp shot of mayhem is the ideal family treat.
The new film is based on the original production of the same title, where the surreal world of Lewis Carroll’s Alice (both in Wonderland and Through the Looking Glass) is given Gerald Barry’s operatic treatment. Barry’s characteristic high-speed energy and riotous sense of humour propels the action forward as Alice plunges down the rabbit hole, into the depths of Wonderland.

Fergus Sheil, Artistic Director of Irish National Opera explains: ‘Our planned performances of the opera in Ireland fell victim to Covid-19, but even before this, we had felt this opera was particularly suited to film so we quickly pivoted in this direction. Alice is very fast paced with frequent scene changes and a myriad of costumes. On film, the production takes on a new form. Details of the set, costumes and props and the extraordinary performances of the cast can be seen at close quarters. The audience are taken even further inside the absurd world of Lewis Carroll and Gerald Barry.’ 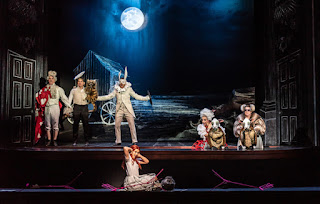 Oliver Mears, Director of the Royal Opera added, ‘I am thrilled that audiences will get the chance to see this tremendous production up close, masterfully reimagined by the film team at INO. It’s a brilliantly crafted show with a stellar cast, and a visual treat for audiences around the globe.’

Co-produced by ROH and INO, and premiered in Covent Garden in 2020, the production is directed and designed by Antony McDonald. Performing under the baton of André de Ridder alongside the Irish Chamber Orchestra, Dublin-born Claudia Boyle leads the cast as Alice. British/Irish mezzo-soprano Clare Presland sings roles including the tempestuous Queen of Hearts, while British mezzo-soprano Hilary Summers reprises roles including the White Queen – one she performed in her Royal Opera main stage debut in the 2019/20 Season.

Other performers include Irish tenor Gavan Ring as, among others, the White Rabbit and Madhatter; American tenor Peter Tantsits as the March Hare and Tweedledee; British bass-baritone Stephen Richardson as the White Knight, Cheshire Cat, Mock Turtle, among others; and bass Alan Ewing as the Red Knight and Humpty Dumpty.
Here's a quick look behind the scenes of when the production was last at the Royal Opera House in January 2020, introduced by tenor, Nicky Spence.
Find out more and book tickets for the streaming link here - stream.roh.org.uk
Images - Clive Barda/ROH
Email ThisBlogThis!Share to TwitterShare to Facebook