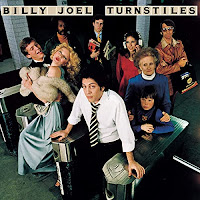 For Educating Omand, Susan Omand has been listening to music that she missed out on first time round. This year, our team of writers suggest albums for her to listen to in Educating Omand: Gap Year. This week, she comes back in through Turnstiles, suggested by Steve Taylor-Bryant...

Yeah, you thought I’d forgotten about this series of articles didn’t you? [No such luck – Ed] Thankfully we’re easing back in to Educating Omand after a mid-season break with an album that I actually knew! And, again, it’s thanks to my mother, who was a big fan of the piano man, so this, and other Billy Joel LPs, were regular listens on the radiogram at home.

I say LP, but it’s not actually that long, with eight tracks in its 36-minute length. First up is Say Goodbye to Hollywood, which always throws me a bit because it uses the same riff and rhythm as the Ronettes’ song Be My Baby at the beginning, so I start singing the wrong words. Incidentally, Ronnie Spector (lead singer of the Ronettes) released a cover version of Say Goodbye with Bruce Springsteen’s E Street Band shortly after Joel’s “original” was released as a single. Next up is Summer, Highland Falls with its truly brilliant piano intro. For me, it’s let down a bit by the odd instrument choice of a clarinet for the middle-8 solo but this is easily offset by the evocative lyric later on in the song, “as we stand upon the ledges of our lives” which, when you realise the song is about bi-polar disorder (manic depression as it was called in those days) takes on a whole world of meaning. It’s difficult not to bop to the two-tone/ska beat of All You Wanna Do is Dance and it’s a light relief after the emotional heft of the previous song. Side one is rounded out by the incredible (and incredibly well-known; surprising since it was never a single) New York State of Mind that takes me right back to the short time I spent in the city that never sleeps and makes me cry every time.

Side two opens with James, which actually reminds me of a song off Billy Joel’s next album, The Stranger, and Just The Way You Are – maybe it’s the tinkly electronic piano thing. It’s followed up by the theme tune to Grampian TV’s Summer at Six, the “more fun” summer version of the North Tonight news programme back in the early 80s [which will likely only mean something to someone from Aberdeen – Ed] … yes, they used Prelude for that. The frenetically stabby piano soon settles down to the smoother, but no less stabby in the lyrics, Angry Young Man, another song which was never released as a single but has become very well-known nonetheless. The penultimate track is the gorgeous, and much more under-rated, I’ve Loved These Days which “hangs our hopes on chandeliers” – that has always struck me as a stunning turn of phrase. The highly prescient Miami 2017, written in 1975 about a, then, fictional possibility of the downfall of New York, rounds out the album in suitably post-apocalyptic style.

So, it’s thank you to my mother for instilling a love, mostly through osmosis, for all things Billy Joel. Thank you to Steve for suggesting I listen to this one again, I really had forgotten how much I loved it. But most of all, thank you to Billy Joel for being the piano playing poet that everybody needs in their lives.
Image - Amazon