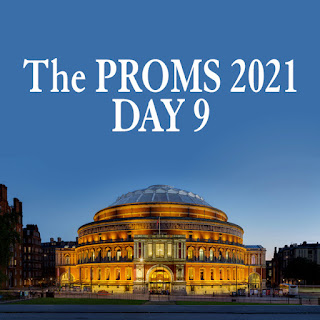 Continuing our daily coverage of what's on at The Proms 2021, Susan Omand takes a quick look at today's Prom...
Tonight's Prom will be televised on BBC Four
We're back among Beethoven [no, nothing to do with a St Bernard - Ed] for the "main event" of tonight's prom and his storming 3rd Symphony Eroica, so named [in Latin obvs - Ed] because he thought it a heroic piece of music when he wrote it, and indeed he dedicated it to Napoleon Bonaparte until Bonaparte declared himself Emperor and proved to be a bit of an arse.
Before that though, we have a couple of London premieres and a cracking Prokofiev violin concerto, which is in the very capable hands of Nicola Benedetti. The wee premieres could be interesting though, even though they're both only 8 minutes long. First up is CHANT by composer and jazz trumpeter Laura Jurd. Having found some of her work on her website I'm expecting it to be suitably jazzy and trumpetty. But it's the Jessie Montgomery premiere that caught my eye for today's clip. Banner was written as a commission in 2014 to mark the 200th anniversary of The Star Spangled Banner and riffs on the concept of the original, and draws on themes, anthems and folk songs from the US' event spangled history, answering the question “What does an anthem for the 21st century sound like in today’s multi-cultural environment?”

On Prom night we're getting a premiere of a chamber orchestra version, which could be very stripped back, but here's the complex and multi-layered original.
Here's the full programme for today's Proms which you can listen to live on Radio 3 or on the iPlayer
Laura Jurd
CHANT (8 mins) London premiere