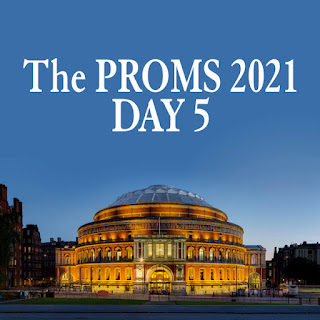 Beethoven has a lot to answer for in today's Prom. Not only do we get his own 4th Symphony tonight, one which, in the Beethoven symphony portfolio, "suffers" from being sandwiched between the heavyweights of the 3rd (Eroica) and 5th symphonies [yes that Beethoven's 5th - Ed], but it is preceded in tonight's programme by Schubert's Symphony No 2 and a UK premiere of The Eternal Stranger by Ella Milch-Sheriff, both of which borrow heavily from the themes of Beethoven's works. Schubert's No 2, written when he was only 17 [show-off - Ed] "samples" the theme from Beethoven's overture to the ballet The Creatures of Prometheus for its own first movement theme and Ella Milch-Sheriff uses fragments and snippets of Beethoven's famous works throughout The Eternal Stranger, which was commissioned by the Gewandhaus Orchestra in Leipzig to mark Beethoven's 250th birthday last year.
Milch-Sheriff is not a composer I know at all but the idea of her work intrigued me so I went looking. She was born in Haifa, Israel, graduating in composition from the Academy of Music at Tel Aviv University, and you can hear that Middle Eastern influence in some of her music. Working across the genres of Classical music, she composes operas, chamber, orchestral and vocal music as well as popular music and solo works and her compositions are becoming much more widely performed now.
Since today's Prom is not going to be televised, I thought you'd want to see how the performance of The Eternal Stranger should look as it's "a drama for one actor and orchestra." The actor in the clip below, Eli Danker, is the same one who will take the stage in tonight's prom so this should help you visualise as you listen. Oh, and don't worry, even though the video below is long, The Eternal Stranger performance itself is only the first 15 minutes.

Franz Schubert
Symphony No. 2 in B flat major (29 mins)

Ludwig van Beethoven
Symphony No. 4 in B flat major (34 mins)