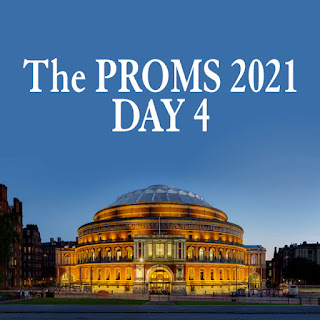 Continuing our daily coverage of what's on at The Proms 2021, Susan Omand takes a quick look at another double prom day...
I guess you could actually say there were 3 proms today only one is done twice - as clarinettist Michael Collins is joined by cellist Adrian Brendel and pianist Michael McHale to celebrate the 150th anniversary of Austrian composer Alexander von Zemlinsky at the Cadogan Hall both afternoon and evening. Zemlinsky isn't a composer I know at all but, on doing a bit of a dig, I've discovered he was an Austrian composer and conductor from the late 19th/early 20th century. He was a contemporary of Mahler, who conducted the premiere of Zemlinsky's opera Es war einmal and also stole his girlfriend, and of Schoenberg, who taught him about musical counterpoint and married his sister. Why do musicians never have ordinary lives?! It should be interesting to listen to his work though as I like the work, if not the social manners, of both of those others. It is coupled with a Brahms Trio for Piano, Clarinet and Cello to which I will give the benefit of the doubt as I love the instruments but am not the greatest fan of Brahms' work.
Brahms features in the other Prom today too, which is also televised (Friday 6th August), and sees Elim Chan Conduct the BBC National Orchestra of Wales in a performance of his Symphony No 4. Before the interval she picks up the baton to conduct the incredible cellist Sol Gebetta in Saint-Saëns’s Cello Concerto No .1, after the world premiere of a short work by American composer Elizabeth Ogonek and the gloriously dark and powerful Dido's Lament from Purcell's Dido and Aneas.

In today's video, the lament, When I Am Laid in Earth, gets the pop star treatment. Played by the wonderful Orchestra of the Age of Enlightenment, and featuring the stunning voice of mezzo-soprano Helen Charlston, the video is inspired by the work of Jamie Thraves, the Director behind the Coldplay video for 'The Scientist'.

Johannes Brahms
Trio for Piano, Clarinet, and Cello in A minor, Op. 114(25 mins)

Henry Purcell
Dido and Aeneas – ‘When I am laid in earth’ (Dido’s Lament)(4 mins)arr. Stokowski

Camille Saint‐Saëns
Cello Concerto No. 1 in A minor(19 mins)