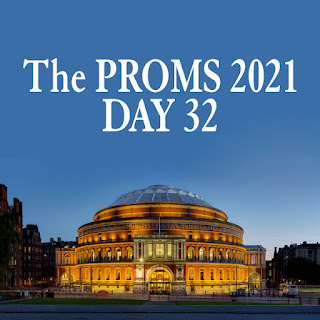 Continuing our daily coverage of what's on at The Proms 2021, Susan Omand takes a quick look at today's Prom...
It's just as well it's a bank holiday today as there's loads going on at the Proms, with not one but two [three, if you count the first one twice - Ed] to choose from.
First up, there's French Fancies for afternoon tea [CAKE? - Ed], and several pieces that I don't know. We have THREE oboe sonatas, though, including one from yesterday's Composer du Jour Camille Saint-Saëns, and it will make an interesting "compare and contrast" to see how the same instrument and classical structure can be treated differently. Sandwiched [are you hungry? - Ed] in between, we get the Seashore Suite from Ruth Gipps, another oboe-centric work from a composer who I'm coming to appreciate more since my introduction to her work earlier this season. The afternoon rounds off with Bozza's Fantaisie Pastorale which is, guess what, a work for oboe! Hopefully soloist Olivier Stankiewicz has his reed moistened [not a euphemism - Ed].
The evening prom has two World Premieres, including one from 1680. OK, it's a reboot [yes, we get them in classical music as well as in movies - Ed] with the first performance of a transcription of Purcell's work by tonight's conductor George Benjamin. The other premiere is also a work of his, this time a full concerto in co-commission with the Mahler Orchestra. The other two works tonight are a Ravel work that, surprisingly, isn't Bolero and a fun little piece from Oliver Knussen which comes from the orchestral interludes of his collaboration with Maurice (Where the Wild Things Are) Sendak and an operatic version of Higgledy Piggledy Pop!
However, it is back to Ruth Gipps' sea-shore we go for today's clip; partly because of the music but mostly because of the relaxing seaside visuals. Happy Bank Holiday!
Here's the full programme for today's Proms which you can listen to live on Radio 3 or on the iPlayer
French Fancies - 13:00/18:00