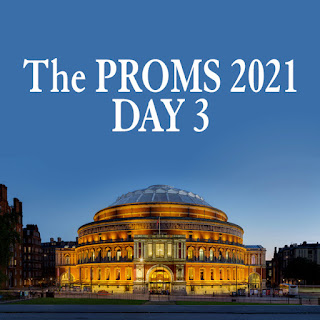 Continuing our daily coverage of what's on at The Proms 2021, Susan Omand takes a quick look at the double programme for Sunday...

Oh Mr Proms Organiser wiz today's proms programme you are really spoiling us! Because there are not one but TWO different proms on today and BOTH feature on my Top Five Proms to Listen To list from last week.

The morning one sounds fascinating as a concept. You all know by now how much I enjoy a good organ [shut up - Ed] and I love this idea of Olivier Latry's – who is the Organist at Paris’s Notre-Dame Cathedral – to perform works by J. S. Bach before taking them as a starting point for his own improvisations. It will be really interesting to see what he does with them and whether he keeps the Bach influence or goes off on a real tangent.

The evening prom is Mozart, Mozart and more Mozart! Sublime joy. Three back to back symphonies - 39-41 in chronological order - which were his final ones, composed in very quick succession over the summer of 1788. They work in almost the same way as a film trilogy too, with Symphony 39 acting as an overarching introduction, with no finale, and Symphony 41 with no discernible introduction but a (very) grand finale.

It is the "middle film" of the three symphonies though that I want to take today's clip from. Symphony 40 is one of only two symphonies that Mozart wrote in a minor key and known as his Great G Minor Symphony (the other being his Little G Minor Symphony, number 25.) There are two versions of this Symphony in existence, with a revision which has a pair of clarinets added and the rest of the woodwind "reorganised" to fit them in. Also - a good piece of trivia here - apparently, both versions of the manuscript were bought in the 1860s by Johannes Brahms. It will be interesting to hear which version they decide to play tonight.

Here is the 3rd movement (with added clarinets) performed by the Norwegian Chamber Orchestra. As it's a Minuet, listen for the triplet time signature (like a waltz but faster) but it is a thought that the audible aggression of this piece may not be the most conducive to dancing!


An Evening of Mozart with the Scottish Chamber Orchestra - 20:00