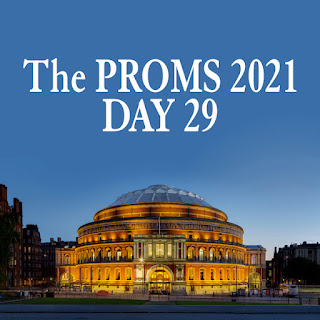 We start tonight with a seldom heard piece which, for me, evokes all the fun of the circus, with John Foulds Le Cabaret. Foulds was originally a theatre composer and this was written as an overture for the writer/director Sacha Guitry’s pantomime play ”Deburau” for the concert hall, however Foulds released it on its own merits in 1925. It hasn't been played much since, with only a few recordings made, so it's good to hear it again tonight.
This is followed by another piece specifically written for a performer, this time by William Walton who wrote his viola concerto for the very famous (at the time) violist Lionel Tertis [no, not Tetris, that's a Russian computer game - Ed]. However, Tertis rejected it as "too modernist" and it ended up being first performed by fellow composer Paul Hindemith, whose work we have heard earlier this season.
After the interval we are treated to the UK Premiere of Charlotte Bray's Where Icebergs Dance Away and, from the tiny snippets I've heard so far, you will need to wrap up warm to listen to it. Influenced by the stunning artwork of Zaria Froman [it's unbelievable that this is done in soft pastels - Ed] you can hear the ice crickle and crack before it starts to melt.
Today's clip though comes from the final piece of the night, by the wonderful Malcolm Arnold. Probably best remembered now as an award winning film composer, with over a hundred film scores to his name, his symphonies also reflect that Hollywood feel with a lot more melody than was deemed "proper" at the time. Indeed, of the second movement here, Arnold's own programme notes for the Symphony's premiere state that "the composer is unable to distinguish between sentiment and sentimentality." He went on later to explain that "The point that I was trying to make in this work was the fact that we all, in great emotional crises, express ourselves in the simplest of cliches" and, when you find out that it was written in memory of of several of his friends who died at young ages, this becomes ever more poignant.