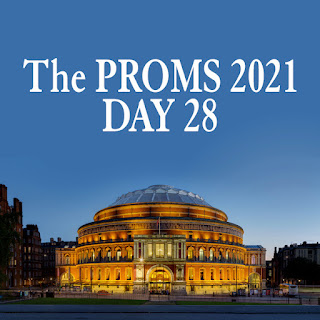 Tonight's Prom will be televised next Thursday (2nd) on BBC Four
I must admit to knowing very little about American composer George Lewis but his World Premiere tonight sounds like a fascinating concept. The Proms website describes the work as blending "a traditional orchestral setup (performed here by the BBC Scottish Symphony Orchestra under conductor Ilan Volkov) with spatialised electronics to make best use of the Royal Albert Hall's acoustics and space." In an article in a recent BBC Music magazine, Lewis explained the process further: "The computer will improvise based on what it hears from the orchestra; so at a certain point, sounds will pop out of the texture and jump around the hall." I'm intrigued to say the least!

After the interval though, we leave the digital age and travel back to that classical stalwart of Beethoven, which seems an odd mix of composers to put together, thinking about it. However we'll run with it. First up we get the concert aria Ah! Perfido (Ah! Deceiver). Now, if you have paid attention to my ramblings over the years, you'll already know that a concert aria doesn't actually come from an opera but is written as a stand alone piece, usually with a specific performer in mind. This one was first performed in 1796 with with soprano Josepha Duschek (who happened to be a close friend of Mozart's) as the soloist. Due to unfortunate abbreviation, it was advertised as "written by Beethoven for Mad Duschek!"

The final work of the night is Beethoven's 2nd Symphony and it seems, even back in the day, to have "had mixed reviews" with one critic calling it "a hideously writhing, wounded dragon that refuses to die" and another commenting that the opening motif in the final movement sounded like "a hiccup, belch or flatulence followed by a groan of pain." Ouch!

Here's the full programme for today's Proms which you can listen to live on Radio 3 or on the iPlayer
George Lewis
Minds in Flux(30 mins)BBC commission: world premiere