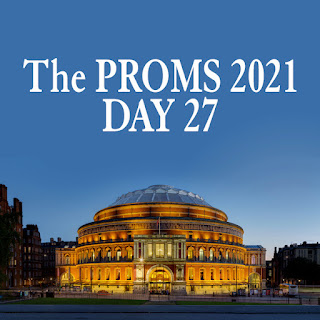 Tonight's Prom will be televised tomorrow night on BBC Four
Ah, the Four Seasons... or should that be the eight seasons tonight? Yes, as well as the ubiquitous Vivaldi violin concerti tonight, we're also getting a work by the tango king Astor Piazzolla, which is also called The Four Seasons, only this time they're the Four Seasons of Buenos Aires.
What's interesting about the Piazzolla piece is that it wasn't originally written as a suite of compositions. Instead they were written over a period of 4 or 5 years in the 1960s and often played separately until, in 1996-1998, the Russian composer Leonid Desyatnikov composed a new arrangement with a more obvious link between Vivaldi's Four Seasons and Piazzolla's. He did this by converting each of Piazzolla's movements into three-sections and arranging for solo violin and string orchestra. In each movement, Desyatnikov also included several quotations from the original Vivaldi which, in effect, makes the suite a "response" to the original. It's also interesting to note that the "temperature" of the Piazzolla Seasons stays fairly constant, without the variation in tone that's heard in the Vivaldi, something which is also true of the country's own weather I guess.

Anyhow, it will be interesting to hear both the Piazzolla and the Vivaldi played back to back tonight. There's not really much I can write about the Vivaldi that you don't know already, such is their popularity, but when I went looking for a clip to share with you today, I came across this version and I bet you haven't heard Vivaldi played like this before.
Here's the full programme for today's Proms which you can listen to live on Radio 3 or on the iPlayer
Antonio Vivaldi
The Four Seasons(37 mins)