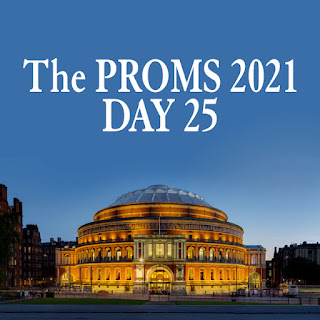 She plays the harp, he plays the kora and when they met it was moider... oh wait, no, that was Hart to Hart [showing your age there - Ed].

Seriously though, the evening prom seems to be a meeting of minds as the harpist Catrin Finch and West African kora (harp-lute) player Seckou Keita take to the stage for what promises to be a feast of cultural harmonies, folksy roots and a world of world music. More than that I cannot tell you because, as appears to be the fashion this season when it's a "not classical" prom, the Proms website isn't giving anything much more away as to which works we might hear tonight.

That's not the only world music on offer today though as the early prom heads to the other side of the Atlantic from Europe and Africa, to South America, specifically Argentina and a celebration of the centenaries of not just one but TWO Argentine composers this year. Ramírez is noted as being the "chief exponent of Argentinian folk music" and we're getting a selection of short songs, some of which come from his collaborative work with poet Félix Luna, celebrating women fighting for their freedom, Mujeres Argentinas.
Before that though we get tango'd by Piazzolla [no, not that kind of Tango'd - Ed] as we get taken through the full Histoire du tango, a single twenty minute work in four movements which evokes the history and evolution of the tango: Bordello 1900, Café 1930, Nightclub 1960, and Concert d'Aujourd'hui. This is followed by an aria from the tango opera [ha, I bet you never knew such a thing existed - Ed] María de Buenos Aires.
Talking of tango though... you dancing?


Image adapted from NORTH-FACING ENTRANCE OF THE ROYAL ALBERT HALL AT DUSK © David Iliff
Email ThisBlogThis!Share to TwitterShare to Facebook