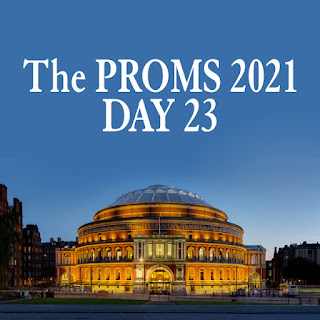 Continuing our daily coverage of what's on at The Proms 2021, Susan Omand takes a quick look at today's Prom...
Tonight's Prom will be televised on Friday 3rd September on BBC Four

I'm conflicted. You know my feelings about "not classical" music and its place at the Proms but this year I've been enjoying the jazz, the world music, hell, even the Hollywood musicals. So why not look forward to this one?
Here's (a small part of) my argument with myself:
Me: An orchestral arrangement of a pop song doesn't make it Proms material
Also Me: Ah but you wouldn't say that if it was Queen or Bowie would you?
Me: True. But those artists and their music is big enough and well known enough for an orchestral arrangement to add an extra something. I feel I can appreciate (if not necessarily like) the alterations [you really wanted to say ch-ch-ch-changes there, didn't you? - Ed] that a new arranger could make. I don't know this music.
Also Me: Ah but there have been proms in this very season with "proper" classical music and composers that you didn't recognise and you gave them a go, what's the difference here?
Me: Fair point. Ummm...
So I went to listen to the albums that we're going to get orchestral extracts from tonight. Aromanticism (released in 2017) is ok... but only ok. There's real possibilities here with sampling, spoken word and interesting instrumentation adding surprising depth in the shorter tracks that intersperse the rest of the album. But that potential, for me is never really realised, with the longer songs coming across as very electronic ambient/commercial pop; think Groove Armada - great in small doses but you tend to wander off and do something else in the middle of a song. And I'm also not immediately drawn to the sung vocals, which, in a way, surprised me, because his is nearly a Seal/Prince/Kravitz style voice and I should love it but I just felt there was something lacking that the spoken word voice promised.
However...
Grae (released in 2020) is like it's by a totally different artist. It's SUPERB! It hooked me from the start though with Insula sounding very 2001: Space Odyssey in its performance. The rest of the album is so much better too - bassier, richer, orchestra, brass and piano rather than electronic, with fascinating rhythms and astounding experimental harmonies. His voice has evolved in those three years too and now has that shiver-inducing "something" that was missing before. This is tremendous stuff, highly recommended in its original album form and will make for fascinating orchestral translation.
So, benefit of the doubt, I'll give the Prom a go and hope for more Grae than Aromanticism.
Listen to Cut Me from Grae
Here's the full programme for today's Proms which you can listen to live on Radio 3 or on the iPlayer
Moses Sumney

Songs from his albums Aromanticism and græ in new orchestral arrangements, masterminded by Jules Buckley.
Image adapted from NORTH-FACING ENTRANCE OF THE ROYAL ALBERT HALL AT DUSK © David Iliff