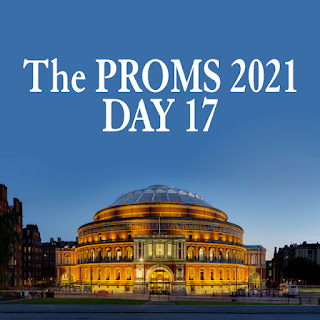 I must admit to knowing very little about Abel Selaocoe, but he's a cellist so I'm there for this evening's Prom. Doing a bit of a dig, his website says he "combines virtuosic performance with improvisation, singing and body percussion, and has a special interest in curating recital programmes that highlight the links between Western and non-Western musical traditions." OK, that really has piqued my interest.
Looking at the programme, while I recognise the French baroque composer Rameau, whose work comes from the early 1700's, the rest of the names are, shamefully, new to me - because they are all modern composers [you really need to keep up your education - Ed]. Giovanni Sollima is an Italian composer and cellist whose work crosses genres, from jazz and rock to ballet and opera, and has worked with the likes of Patti Smith. Sidiki Dembélé is a multi-instrumentalist from Cote d’Ivoire who specialises in keeping the roots of his West African music heritage alive. And Simo Lagnawi is a Moroccan Gnawa master whose work encompasses the traditional music of black slaves who were taken from countries such as Guinea and Sudan to work in North African countries. It will indeed be an interesting and very cosmopolitan evening.

However, today's clip comes from Selaocoe's own YouTube channel. It's called Lamentatio, a reworking by Selaocoe of a Sollima composition, and it gave me goosebumps. Listen to this...
Here's the full programme for today's Proms which you can listen to live on Radio 3 or on the iPlayer