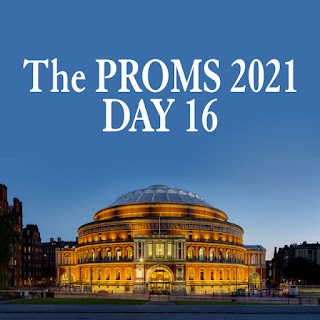 This prom will be broadcast on BBC Four on tomorrow evening

It's another "big name" prom tonight as we get piano/keyboard works from some very famous composers across the ages, thanks to the prowess of the award-winning Icelandic pianist Víkingur Ólafsson who takes us from the short and sweet energy of Bach's keyboard concerto (originally written, of course, for harpsichord rather than piano) to the stormy richness of Mozart's Piano Concerto (which WAS written originally for the piano). The contrast between these two works, performed on the same instrument by the same person, will be an interesting listen.
These are bookended by two symphonic treats that also bear comparison with each other. At the start of the evening we get Prokofiev's Classical Symphony No 1, which is truly classical in style, although he himself described that term disparagingly as "Bach on the wrong notes." We end the evening though with the startling Shostakovich Symphony No 9. I say startling because it's lightness and brightness contrast remarkably with the heavy-weights of his symphonies 7 and 8. However, that surface joy seems to hide a deeper meaning when you realise that a folk dance tune, The Dance of the Bones, said to be a favourite of Stalin, provides the theme for this, the final movement of the symphony, before it just... stops. Ouch.