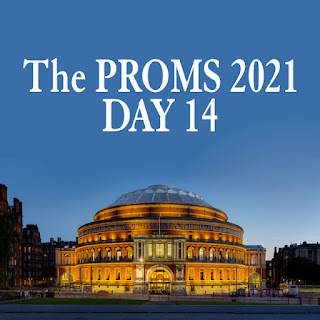 Continuing our daily coverage of what's on at The Proms 2021, Susan Omand takes a quick look at today's Prom...
It's an evening of big hitters at the Prom tonight to celebrate Vladimir Jurowski's final appearance as the London Philharmonic Orchestra's Principal Conductor after nearly 20 years.

If, like me, you're looking at the programme and wondering how the heck a Bach piece can be a UK Premiere, let me put you out of your misery - it's the arrangement by Goldmann that we haven't heard here before. That in itself is surprising though, considering it was originally done in 1977!
This is followed by the 1934 Hindemith symphony Mathis der Maler [meaning Matthias the Painter, celebrating the work of German Renaissance artist Matthias Grünewald and nothing to do with Mahler - Ed.]  The work, a concept piece for his later opera of the same name, was well received by the public on its first performance but was roundly criticised by the Nazi regime, both for its frivolous content and the fact that Hindemith was already denounced as a "degenerate with Jewish connections" by the party.
Speaking of Nazis, they were allegedly also an influence in the Stravinsky work that starts the evening. Jeu des Cartes (Card Game) is a 1937 ballet in three "deals," as Stravinsky called the different sections. The main character is the deceitful Joker, who fashions himself unbeatable, owing to his chameleon-like ability to become any card. There are also other cards - Queens, Aces and several card players portrayed in the ballet which culminates in the triumph of hearts over spades. Make of that what you will.
Surprisingly, for me, though, it's not the Stravinsky piece that you're getting for your clip today but the William Walton Cello Concerto, which will be played tonight by the sublime Steven Isserlis. It was written in 1957 and, at the time, was deemed a bit old-fashioned for the modern classical audience by critics, one of whom said "what dissonance there is would not alarm an elderly aunt." However others were more forgiving of it, calling it rhapsodic, serene and wistful.

Here's the first movement, played by the cello maestro Julian Lloyd Webber back in the day.