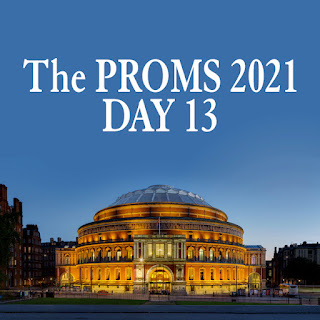 Day 13 is definitely lucky for some, i.e. me, because we get some more Stravinsky! Not only that though, this is Stravinsky's Firebird Suite. FROM MEMORY. I know, right? Not only do you have to be able to play it, you have to do it without any music in front of you. AND they have to do it twice because this afternoon's prom is repeated in the evening! At least you'll be able to watch one of them as it's going to be televised on Friday.

Before that though, we have some glorious piano with Rachmaninov's Rhapsody on a Theme by Paganini (or page nine if you are a Three Stooges fan like me). You'll definitely recognise it because it's a melody that has appeared in countless film scores (like Groundhog Day, Ronin and one of my favourite time travel movies when I was a kid, Somewhere in Time) but have you ever thought about which theme of page nine... sorry... which theme of Paganini's was borrowed for all that sweeping melancholy romance? It was his Caprice No 24 in A Minor (itself consisting of multiple variations on the theme) or, as you'll likely know it better, the TV theme from The South Bank Show. BUT did you know that Paganini was called the Devil's Violinist because he sold his soul to get his talent? Well, now you do.

Sergey Rachmaninov
Rhapsody on a Theme of Paganini (23 mins)