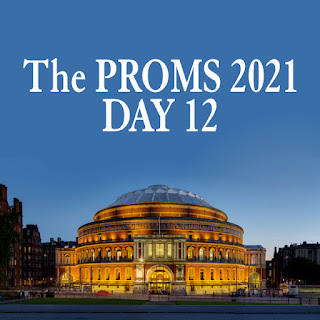 Wrap up warm for today's Prom as we head north for inspiration this time. Looking post-interval first, we get the uber-classical Schumann's Symphony No 3, inspired by his trip with his wife Clara to the Rhineland in Germany and there's a happy holiday feel to the music, reflecting his experiences.
Contrast this with the opening work by Swedish composer Britta Byström. Obviously we don't know what Parallel Universes is going to sound like as it's a World Premiere tonight, but listening to some of her other work on her website it's going to be challenging but atmospheric.
It is to Sibelius that we turn for today's clip, however, and his Violin Concerto in D minor. Played tonight by former Young Musician of the Year, Jennifer Pike, here the third movement is performed by the titan that is Maxim Vengerov alongside the Chicago Symphony Orchestra conducted by Daniel Barenboim. I'm pretty sure you'll recognise it, as it appears often on popular classics lists - even though one music critic back in the day called it "a Polonaise for Polar Bears!"

Here's the full programme for today's Proms which you can listen to live on Radio 3 or on the iPlayer
Britta Byström
Parallel Universes (12 mins) BBC commission: world premiere