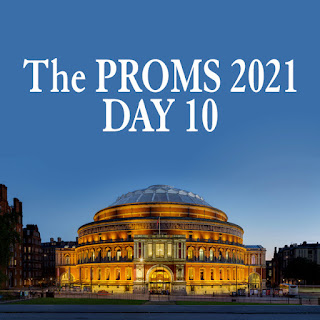 Continuing our daily coverage of what's on at The Proms 2021, Susan Omand takes a quick look at today's Prom...
It's a whole new world today on the Proms... yep, it's time for Dvořák's New World Symphony. No Proms season is complete without it! Even if you think you don't know it, you'll know at least one section as the Largo from the New Word Symphony is the tune to the Hovis bread ads from back in the day when the wee lad pushed his bike up a very steep hill in a village [you're humming it now, aren't you? - Ed.] As a random aside, did you realise that that advert was directed by Ridley Scott? Yes that Ridley Scott of Bladerunner, Alien, Gladiator etc etc etc. This was where he started out.
Before the Dvořák though, we're still Stateside. First up is a new commission by the American composer Augusta Read Thomas to celebrate the 150th anniversary of the Royal Albert Hall itself, scene of many a prom in its time and the venue for tonight's one. Obviously, as it's a world premiere, I haven't heard the work we're getting tonight, but I went to her website to listen to some of her oeuvre and it's really interesting - challenging but not disconcertingly so imho.

It's the middle piece that today's clip is from though. Charles Ives Three Places in New England can be played in any order but the usual set up is The “St. Gaudens” in Boston Common first, followed by
Putnam’s Camp, Redding, Connecticut and The Housatonic at Stockbridge. All three movements "borrow" heavily from themes and melodies in US folk music, whether it be slave's Plantation songs and Civil War songs in movement 1 or the hymns and rhythms of movement 3. It's in Movement 2, below, though that the most recognisable songs are re-interpreted, from Yankee Doodle, to the Star Spangled Banner, to Marching through Georgia. There's even a smattering of British Grenadiers and Valkyries in the mix!

Here's the full programme for today's Proms which you can listen to live on Radio 3 or on the iPlayer
Augusta Read Thomas
Dance Foldings (13 mins) BBC commission: world premiere